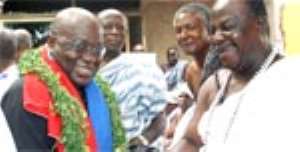 THE PRESIDENTIAL candidate for the ruling New Patriotic Party (NPP), Nana Addo Dankwa Akufo-Addo, has called on all well meaning Ghanaians who have attained the age of eighteen and above to turn out massively to register when the voters' register is opened in May this year.

He noted that their registration would give them the mandate to exercise their franchise which he was counting on to win the elections hands down.

The presidential hopeful was speaking at separate gatherings held in his honour in Sunyani Polytechnic (S.Poly), Seketia and Sampa in the Jaman North District, Dadeasoaba and Hwediem in the Asutifi District, as well as Sankore and Kukuom in the Asunafo South District.

He said Ghanaians would have to come out in their numbers on December 7, 2008 to vote massively for him and the NPP for a clear and decisive victory in order to call the bluff of the NDC and prevent the Kenya situation in Ghana.

He noted that the NPP had the best policy plan ever to grow the economy of the country and also to secure the future of the youth.

He told the TESCON members at Sunyani Polytechnic that the December poll was to determine their future and urged them to vote for the NPP for a better, industrialized Ghana.

He said an NPP government would have the Ghanaian youth trained adequately to meet the challenges of the job market.

Ghana, he said, had seen nothing yet because better days were ahead. “You have no idea the kind of money about to flow into the country.

The oil would bring us lots and lots of money which would need capable people to manage for the development of the country.

That is why you have to vote for Akufo-Addo and the NPP who have all it takes to steer the country to a better future.”

He said the good people of Ghana and the NPP, having toiled to bring the economy this far, would not allow any group of people to turn the clock of development backward.

At the Sunyani Zongo, the candidate, who calls himself a Zongo boy, asserted that there was no candidate among the lot who was better placed than him to understand their needs since he was born at Cow Lane, bred in Nima (all Zongo communities in Accra) and referred to himself as an old student of Zongo.

He promised that the needs of the Zongo communities would be adequately catered for under the presidency of Nana Akufo-Addo.

“NPP would safeguard the peace and tranquility the country is enjoying now and would not allow any people to destroy it”, he promised.

A member of the campaign train, Boakye Agyarko, whipped up the sentiments of the TESCON students when he told them that the 2008 polls were crucial and a determinant factor of the future of today's youth.

Mr. Agyarko observed that during the reign of the NDC, the size of Ghana's economy stood at only $3 billion but under NPP, the economy had grown to $15 billion.

He said the NDC in its own wisdom knows that given even 100 years, it could never achieve what the NPP had done in seven years of its reign.

Mr. Agyarko said 20 years was enough for any well meaning political group to transform the fortunes of the country, and since the NDC could not boast of that, it did not deserve the mandate of the people any longer.

He therefore urged the public to go for Nana Akufo-Addo and the NPP for a better and secure future.

Earlier, when Agyarko was called to talk at S. Poly, his speech was abruptly interrupted by a section of students who refused to stop singing Captain Nkrabea Effah Dartey's popular tune 'm'atwen awurade enim' until the former captain stood on his feet and was given the floor to lead the gathering to sing, forcing Agyarko to take his seat.

The captain as usual sang melodiously with poetic gestures electrifying the whole place.

Sunyani as well as all the other places Nana visited, including the orphan constituencies which were believed to be NDC strongholds such as Sampa, Mbehame, Sankore, and Dadesoaba, were charged when the NPP's campaign train arrived.