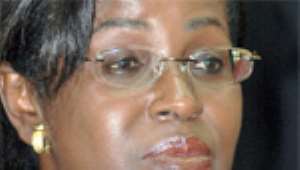 Government, in conjunction with the government of Liberia and the United Nations High Commission for Refugees (UNHCR), has finally decided that all Liberian refugees currently in Ghana must leave the host country for home, as the civil war which ravaged their country ended five years ago.

The decision was the result of a tripartite agreement between the two countries and the UNHCR at a meeting during the weekend following the arrival of a high-powered Liberian delegation led by the country's Foreign Affairs Minister, Mrs. Olubanke King-Akerele.

The mass repatriation will start with those refugees who voluntarily opted to return to their native land under the UNHCR-sponsored programme.

The meeting also concluded that the refugees at the Gomoa Buduburam Settlement Camp be dispersed and settled in smaller communities for better management and monitoring.

“The meeting also agreed that the refugees, who were relocated to Kordiabe, be returned to the Buduburam Settlement. This has been done,” said the Minister.

According to Mr. Bartels, the apparently innocent demonstration embarked upon by some Liberian women and children was just a smokescreen by some persons to cause massive mayhem at Buduburam, in particular, and the nation at large. “Government is aware of the presence of a number of ex-combatants at the settlement and will not sit down unconcerned for our national security to be jeopardized.”

Ghana, which has since the onset of the 1989/90 Liberian civil war hosted several thousands of Liberian refugees, recently came under fire and brimstone from a section of disgruntled Liberians who claimed they did not want to be integrated into Ghanaian society.

The demonstration was in support of a petition addressed to the UNHCR in Geneva demanding, among other things, that they wished to be settled in a Western country and US$1,000 for each refugee opting for repatriation.

To register their displeasure, the group of Liberians, since February 19, 2008, embarked on a protest along the main highway from Accra to Takoradi, a move described by government as illegal “as it did have security implications for the country.”

Some of the protestors resorted to stripping themselves along the main road thereby causing so much public nuisance and embarrassment.

According to the Minister, who was surrounded by his various heads of departments and agencies, government did not have any intentions of integrating the Liberians into Ghanaian society as they had erroneously been misled by their ring leaders to believe.

Government, according to Mr. Bartels, met with the leadership of the demonstrating Liberians and warned them of the illegality of their actions as well as urging them to refrain from flouting Ghana's laws with impunity.

“Despite several pleas made to them to stop their illegal activities, they continued to defy and flout our laws with impunity. They stopped their demonstrations only on Easter Monday, March 24, 2008.

“These refugees had in the last month succeeded in physically preventing children from going to school at the settlement and thereby forcing the closure of all schools in the camp.

“They had prevented the National Catholic Secretariat and other Non-Governmental Organisations from distributing food to the vulnerable which include the elderly, sick and children, most of whom rely heavily on the food distribution.

The Minister was not happy that the action of the demonstrators was to the extent that the World Food Programme had to ask for police protection before it could distribute food to the refugees.

Among other allegations against the demonstrators was the fact that they drove away some of the leadership of their welfare council from the camp for refusing to support their cause.

Mr. Bartels said there was no longer any justification for any Liberian to live in Ghana as a refugee as they could now go back home in safety and in dignity.

“Today, there is absolute peace in Liberia and its citizens continue to return home without fear.

Liberia has established herself as a respected and accepted member of the International Community where democratic governance structures are in place. Liberia has been peaceful for over five years and over one million refugees have returned home,” he stated.

He was emphatic that though Ghanaians were, by nature, very lenient and hospital, they would not allow any person, group or country, to break its sovereign laws with impunity.

Budget approval: NDC and Adwoa Safo’s PA engage in ‘It’s her...
21 minutes ago