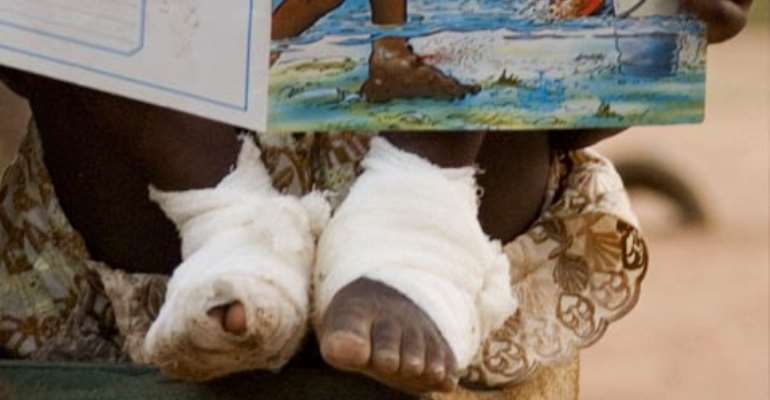 ACCRA—One year after witnessing the horrific Savelugu Guinea worm outbreak in northern Ghana, former U.S. President Jimmy Carter returned to Accra today to congratulate the national program for its recent effective efforts in reducing the incidence of Guinea worm disease. At the end of 2007, Ghana reported a total of 3,358* cases—the fewest number of cases ever reported since the country's first national Guinea worm case search in 1989. With continued diligence, dedication, and political will, Ghana could be finally within reach of its long-sought goal: zero cases of Guinea worm disease.

“Thousands of Ghanaians have worked for many years to end the agony and economic hardship of Guinea worm disease, and it seems their efforts and dedication at last are being rewarded,” said President Carter, founder of The Carter Center. “With intensified dedication in the field and continued political commitment, the goal of eliminating Guinea worm in Ghana is finally within reach in 2008. But victory cannot be celebrated until every last worm is contained. Now is not the time to be complacent.”

For centuries Guinea worm disease has plagued people living in the region that is now modern Ghana. Guinea worm is a parasitic disease cause by drinking water from ponds contaminated with infective larvae. The disease, known medically as dracunculiasis, is excruciatingly painful because of the blister and slow exit of a parasitic worm through the skin. The worm, sometimes 1 meter in length, leaves its victims temporarily crippled, often for months.

Ghana made a commitment to address the problem in 1988, when it joined the global campaign to eradicated Guinea worm disease. The following year, Ghana conducted its first nationwide, village-by-village search for cases of the disease—recording 179,670 cases in 6,515 villages. The disease was found to occur in virtually every region and district of the country. After only four years, the country's eradication efforts reduced the number of cases to 17,000. However, inadequate funding, an outbreak of ethnic strife, and other obstacles stalled the program for more than 10 years. Although the program slowly improved through increased funding from The Carter Center and other partners, setbacks continued, including a severe drought and break in Tamale's water supply in 2006, resulting in an unfortunate explosion of cases early in 2007.

In response to the outbreak, Ghana intensified its intervention efforts to eradicate the ancient scourge. Through the hard work and perseverance of government officials, health workers, and thousands of volunteers, 2008 so far has seen the largest reduction in cases ever documented.

In January 2008, Ghana reported its 10th consecutive month of reduced cases, exceeding more than an 80 percent reduction each month since October (compared to one year earlier), suppressing the upsurge in cases normally expected at the beginning of the annual peak transmission season--an indicator that case numbers should continue to decline steeply in 2008-2009.

The global campaign to eradicate Guinea worm disease has reduced the number of cases worldwide by more than 99.7 percent: from an estimated 3.5 million in 1986 to 9,383* cases reported in 2007. Together, Ghana and Sudan now report 96 percent of the world's remaining cases. Guinea worm disease is set to be the second disease in human history to be eradicated and the first one without a vaccine or treatment.

In 1986, the Carter Center's Guinea Worm Eradication Program began its work by assisting Pakistan with its efforts to eradicate the disease, and today, it spearheads the global Guinea worm eradication campaign to assist the national ministries of health to eliminate the disease. Major partners of the campaign include the U.S. Centers for Disease Control and Prevention, UNICEF, the World Health Organization, and many other organizations.

The Carter Center was founded in 1982 by former U.S. President Jimmy Carter and his wife, Rosalynn, in partnership with Emory University, to advance peace and health worldwide. A not-for-profit, nongovernmental organization, the Center has helped to improve life for people in more than 70 countries by resolving conflicts; advancing democracy, human rights, and economic opportunity; preventing diseases; improving mental health care; and teaching farmers to increase crop production. Visit www.cartercenter.org for more information.