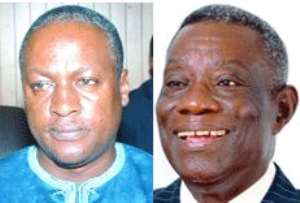 After months of speculations on who will partner the National Democratic Congress (NDC) flag bearer, Prof John Evans Atta Mills, in the December elections, the lot has finally settled on Mr John Dramani Mahama, the four-time Member of Parliament (MP) for Bole-Bamboi.

This follows consultations with all forces within the NDC structure, including the founder of the party, Flt Lt Jerry John Rawlings.


According to the NDC's constitution, the running mate must be nominated by the flag bearer, in consultation with the Council of Elders and the National Executive Committee, and that was what the flag bearer did over the weekend.


The series of consultations ended when Professor Mills briefed former President Rawlings on his choice of Mr Mahama.

According to Flt-Lt Rawlings's spokesman, the former President described the choice as a good one.

Moments before the final decision, scores of NDC women and some members of the December 31st Women's Movement had besieged the office of the flag bearer to demonstrate in support of Mrs Betty Mould-Iddrisu, whose name had also made the rounds as a likely running mate.


The women had stormed the Kuku Hill office of Prof Mills to appeal to him to consider “Auntie Betty” as his running mate.

They outlined the role of women in the nation's socio-economic development and lamented that in spite of all that women had been left on the periphery.


Party sources told Daily Graphic that when Prof Mills granted audience to the demonstrating women, he told them that women would play very important roles in “an Atta Mills government” but that the running mate position was not the only option open to women in the party.


He said his consideration would be based on the general good of the party and that he was grateful to the women for the channel used in putting their concerns across.


The sources said Mr Mahama's consideration over all others stemmed from the overwhelming support he enjoyed among the greater population, particularly floating voters.


They said the Prof Mills was firm in his decision and would not be swayed by any other consideration to change the earlier decision.

He is a communications consultant and member of the Pan-African Parliament. Currently, he is the Minority Spokesperson on Foreign Affairs in Parliament.


Mr Mahama, who is currently on a working visit to Belgium, was a Minister of Communications during the NDC regime.