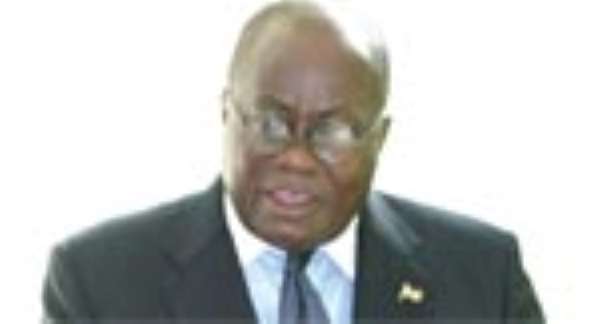 The accident occurred at Sampa in the Jaman North District of the Brong Ahafo Region.

Nana Akufo-Addo began a campaign tour of the region last Sunday and sources have hinted that the trip will see the candidate visiting politically strategic locations before returning to Accra on Friday.

According Dr Kofi Konadu Apraku, Nana Addo's Campaign Director, the injured are responding to treatment at the Sunyani General Hospital where some members of the campaign team have been detailed to remain and take care of them.

He said the convoy was heading for Sankore from Sampa when one of the drivers, on suddenly sighting a rough portion of the road which was under construction, reduced the speed of the vehicle.

The abrupt reduction of speed forced the others in the convoy to do same, resulting in the mishap.

This is the second accident to be encountered by Nana Akufo Addo, the first being when he was still campaigning to win the party's presidential primary.

Convoy accidents are not new to politicians as former President Jerry Rawlings, President John Agyekum Kufuor and Vice President Aliu Mahama have all had their share of the mishaps.

The presidential candidate is said to be continuing with his schedule as his team members receive treatment at the regional hospital.

He was at Kukuom last night.