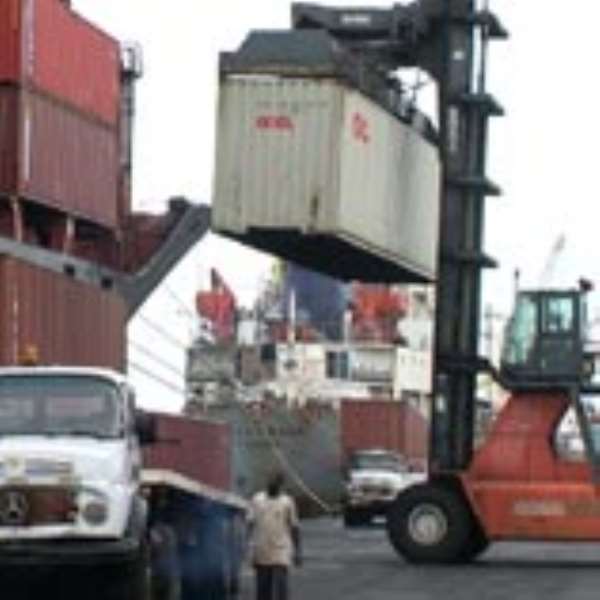 
Some tricksters are reported to have invaded the Tema port and succeeded in diverting containers of goods from getting to their destinations.

The tricksters lure drivers of trucks carrying containers at the exits of the port with huge sums of money and then ask them (drivers) to abandon the goods and abscond.

Thereafter, the tricksters divert the containers to unknown destinations and sell the goods at cheaper prices than what pertain on the market.

A member of the Ghana Institute of Freight Forwarders (GIFF) Council, Mr Carlos Ahenkorah, who made these allegations at a forum in Tema last Friday, called on the security agencies to endeavour to flush out the alleged criminals from the port.

The forum, which was organised by the Customs, Excise and Preventive Service (CEPS), enabled the management of CEPS and business operators at the Tema port to interact and share ideas about their common problems and how to find solutions to them.

It was attended by the Commissioner of CEPS, Mr Emmanuel Nmashie Doku, and senior management staff of the service, as well as officials of the Ghana Ports and Harbours Authority (GPHA).

According to Mr Ahenkorah, the tricksters sometimes offer the truck drivers about GH¢lO,OOO and ask them to abandon their vehicle and go into hiding in Nigeria, Togo or any neighbouring country.

He claimed to have fallen victim to the tricksters on three occasions, pointing out that in one instance, the tricksters managed to divert more than 10,000 bundles of iron coils he had taken delivery-of at the port.

He said unknown to him, one of the trucks that carried the goods had a fake registration number and while transporting the goods from the port, the driver pretended the truck had developed a fault.

Mr Ahenkorah said on the following day when he went to the spot where the vehicle had broken down, they could not find the truck.

He said the matter was reported to the police, whose investigations led to the discovery of the goods at a warehouse around Caprice in Accra.

Further investigations made by the police revealed that the registration number of the truck belonged to a different vehicle.

Talking about other issues such as the problems associated with business operation at the port, Mr Ahenkorah suggested the formation of a National Trade Development and Facilitation Council and the need to have private shippers councils in addition to the state-owned Ghana Shippers Council to effectively address the problems.

The Chairman of the GIFF at Tema, Mr William Addai, described the payment of fees for the transportation of containers from the port to the Golden Jubilee Terminal as unfair in view of the fact that the terminal was considered as an extension of the port.

He stressed the need for the management of CEPS to regard clearing agents as partners because they (agents) contributed immensely to revenue generation by CEPS.

Other participants expressed concern about delays in the processes of clearing goods at the port and charges for certain services which they considered to be either exorbitant, unfair or inappropriate.

Responding to some of the issues raised by the participants, an official of GPHA, Mr Adansi Bonnah, said there were discussions in the past between the GPHA and the Ghana Private Road Transport Union (GPRTU) on the possibility of engaging the services of the union in the transportation of goods from the port.

The aim, he said, was to ensure the identity of drivers and vehicles that were used in transporting the goods and, thereby, avoid instances where importers fell victim to the activities of tricksters.

Mr Bonnah said unfortunately, the discussions broke down somewhere along the line, but he indicated that with the new developments on the activities of tricksters, there would be the need to revive the dialogue.

He said checks conducted at the gates of the port were not meant to duplicate the functions of CEPS but to enhance security.

His response to the issues raised about some of the fees paid for the transportation of containers from the port to the Golden Jubilee Terminal and other service charges was, however, greeted with boos from the audience.

The Commissioner of CEPS assured the participants that the views expressed at the forum would be carried to the Minister of Finance and Economic Planning for consideration.

He said the frequency at which the work environment was changing called for a re-definition of the roles of all stakeholders, adding that “CEPS is committed to the active promotion of the Customs-Business Partnership pillar as advocated by the World Customs Organisation (WCO).”