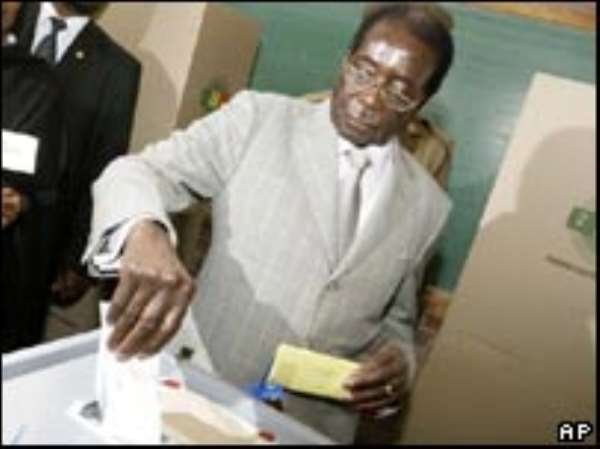 Zimbabwe's government and electoral chiefs have warned the main opposition MDC it should not declare an early victory in the presidential poll.

The MDC, which has repeatedly expressed fears of rigging, has started to quote unofficial returns, saying it has 67% of the vote so far and "has won".

The electoral commission said it was "concerned" at the "purported" results.

The information minister accused the MDC of "speculation and lies" and "causing unnecessary havoc".

Incumbent President Robert Mugabe was facing a challenge from the MDC's Morgan Tsvangirai and the independent Simba Makoni.

House of Assembly, Senate and local elections were held on the same day. Officials say the final results may not be known for a few days.

The secretary general of the Movement for Democratic Change (MDC), Tendai Biti, says it has returns from one-third of polling stations.

Mr Biti says they show a 67% vote for the MDC in the presidential vote, with the party also winning most parliamentary seats in Harare and Bulawayo.

Mr Biti said the MDC was also ahead in some rural areas, including Mr Mugabe's home province of Mashonaland West.

"We have won this election," said Mr Biti. "This trend is irreversible."

He questioned why it was taking so long for the results to be announced, as returns have been posted outside polling stations.

BBC contributors say opposition activists have been celebrating in the towns of Bulawayo and Mutare in the east.

A spokesman for Mr Makoni told the BBC News website that the MDC had "swept the board" in the parliamentary election, with several ministers losing their seats.

But the Zimbabwe Electoral Commission said the country must wait for official results and appealed for patience, as four elections were held at the same time.

Chief elections officer Lovemore Sekeramayi said in a statement: "The commission notes with concern that some stakeholders have gone on to announce purported results of the poll when in fact the results are being verified and collated.

"Those results are not official results of the poll."

The MDC says the commission was appointed by Mr Mugabe and is not to be trusted.

The government went further in its condemnation of the MDC.

Information Minister Sikhanyiso Ndlovu said: "We have warned against speculation, against self-declared winners.

"Biti and the MDC are famous for speculation and lies peddling in the country and causing unnecessary havoc here."

The state-run Sunday Mail quoted the ministry's secretary, George Charamba, as saying that if Mr Tsvangirai declared himself president "it is called a coup d'etat and we all know how coups are handled".

Mr Biti said the MDC was just "protecting its vote" and would not make the "mistake" of the 2002 and 2005 elections when it did not claim victory.

He warned the MDC would not accept a "stolen election".

The more slowly-counted votes from the rural areas, where President Mugabe has always had majority support, may decide the final outcome.

Before the election, state-run media predicted Mr Mugabe would win 57%.

A candidate needs more than 50% in the presidential vote to avoid a run-off in three weeks' time.

Across the country on Saturday, there were reports of voters not being allowed to cast ballots - either because their names were not on the voters' roll or because they were trying to vote in the wrong ward.

The opposition feared many voters would be intimidated and stay at home.

But many voters told the BBC the system had worked efficiently and the atmosphere was good.
After voting in Harare, Mr Mugabe, in power since 1980 and seeking a sixth term, dismissed opposition concerns, saying: "We don't rig elections. I cannot sleep with my conscience if I have rigged."

The MDC says it is fighting to save Zimbabwe's economy.

The country has the world's highest inflation rate, at more than 100,000%, and just one adult in five is believed to have a regular job.

The chiefs of Zimbabwe's police, army, prison service and intelligence services warned on Friday that violence after the polls would not be tolerated.