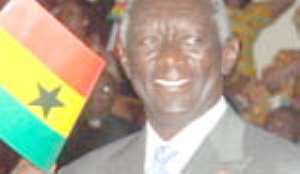 PRESIDENT JOHN Agyekum Kufuor yesterday held a delegation of US congressmen and women spellbound when he recounted Ghana's political and economic strides since he assumed the rein of government some seven years ago.

At a meeting with the 21-member delegation which drove straight to the Castle, Osu, soon on arrival, the President said Ghana had experimented with various types of governance since independence and finally decided that democracy was the best choice.

“We have done a full scale of all types of governance and we came round over the past 16 years that democracy is the way forward.

We are committed to living under the rule of law and our constitution is supreme.”

The visibly elated President told the American parliamentarians that: “At least, the whole world has been telling me that things have been going on well in Ghana since I became president.”

On the Highly Indebted Poor Countries Initiative (HIPC), which the nation signed when he came to power, he acknowledged that the initiative “opened the floodgates of good fortune though people criticized it because they thought it was demeaning”.

He was of the view that the skeptics had been proven wrong as the benefits derived from HIPC had far outweighed the anticipated fears.

He stated that the country was currently on an economic even keel “and we are targeting a middle income status by 2015, which coincides with the attainment of the United Nations Millennium Development Goals (MDGs)”.

The President was happy that Ghana was one of the countries tipped to attain some of the MDGs by the targeted period.

Among the areas of Ghana's economic success mentioned were the stability of the macro economy “despite the turbulence of the market,” and the micro economy which “is also doing well”.

The indicators that the economy was doing well, according to the President, were that several banks were opening branches all over the country and a high level of investor confidence.

“Within a few years, several banks are coming here and that has resulted in greater competition. Initially, we chased the banks for loans but today, they are chasing us.”

On the forthcoming general elections, he challenged the United States and other western nations to send observers to monitor and report on the country's onward march toward democratic development.

“The election will be tough and we want it to be so.”
He said there was so much freedom in the country to the extent that “sometimes we wonder if we don't have too much freedom”.

In response to a question by a Congressman on the international front, the President said the US could help the African Union in terms of logistics and money to address the Darfur crisis.

The Ghanaian President, also the immediate past Chairman of the AU, said if the necessary logistics were provided, the assailants would be “stopped in their tracks to stop the inhumanity going on there”.

Leader of the delegation, Congressman Barney Frank, commended Ghana for being a shining example of “what can be done”. He recounted Ghana's vanguard role in several ventures starting from her attainment of independence.

Mr. Frank said it was delightful that the Ghana government was not only interested in economic growth but also principles such as equity and fairness.

He announced that they were going back home “to work on the next round of debt relief”.

The Congressmen and women took turns to either ask President Kufuor a question or make a contribution. Those accompanied by their spouses introduced them to the President.

Some officials of the US Embassy in Accra including the Charge D'Affaire and the Public Affairs Officer, Christopher W. Hodges, accompanied the delegation to the Castle.

The delegation, which leaves Ghana on Monday, March 31, 2008, will also hold meetings with Ghanaian parliamentarians and some civil society organizations.