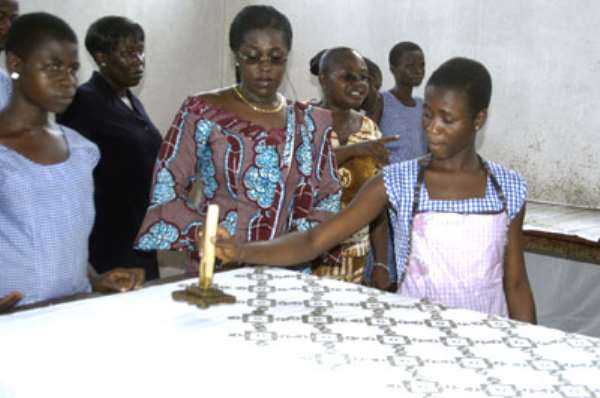 Information Minister At The Tie And Dye Dept. Of RWSDF At Nsawam The Minister of Information and National Orientation, Mrs. Oboshie Sai Cofie, yesterday paid a familiarization visit to the Female Wing of the Nsawam Medium Security Prisons and the Rural Women, Skills and Development Foundation (RWSDF) also at Nsawam. The visit was to mark the International Women's Month.

In her remarks at the Prisons, Mrs. Oboshie Sai Cofie noted that the visit was also to afford her the opportunity to interact with inmates, share their problems and to give encouragement for the period they would be there.

The Minister explained that the policy of all inclusiveness, which the government is vigorously pursuing, ensures that nobody is left behind in the progress and achievements that the country is experiencing.

“The fact that you are incarcerated at this time does not mean that when you come out, you should not be able to take your rightful places in the society and to take advantage to act as women”, the Minister added.

The Minister assured the inmates of government commitments in ensuring that families and children left behind are made to access basic essential social services.

“As you are here, the Capitation Grant enables your children to freely attend any public school, the School Feeding Programme provides your children a nutritious meal on every school going day as well as the National Health Insurance Scheme, which enables your family to access free health care”.

Briefing the Minister about the general operations of the prison, the Assistant Director of Prisons, Mrs. Charity Araba Magnusen, said the female prison, which has a total 113 inmates engages in trade-training to empower inmates with employable skills after their release.

The Prison Service, the Assistant Director of Prisons added, is gradually departing from their lopsided approach to a more pragmatic approach towards the reformation and rehabilitation of the prisoners.

To achieve this, she said “there is a counselling and religious instructions section which deals with moral and psychological problems of the Prisoners.

Mrs. Araba Magnusen noted that the female wing, which has a capacity of 200 inmates has not experienced any overcrowding or crisis except in May 1998, when 17 Ghanaian prisoners serving various terms in Nigerian prisons were transferred to the female yard.

The leader also lamented their poor conditions and lack of women “need” and appealed to the Minister to help acquire them as well as beds, which she said are few and easily destroyed.

Mrs. Oboshie Sai Cofie gave the assurance to carry their concerns across to government and promised to help raise funds to acquire their pressing needs.

The Minister then donated items ranging from toiletries, soaps and other sanitary items to the inmates. Mrs. Sai Cofie was given a token gift by the Prison Service to show their appreciation.

At the Foundation, the Headmistress, Mrs. Mary J.P. Otu, briefed the Minister about the school. She explained that the school, which is funded by a German-based church organization, offers practical vocational skills such as catering, batik tyre and dye and other trade-training educational skills to 53 young women.

The Information Minister commended the handlers of the School for their efforts in improving and promoting vocational skills training in the country.