Do Not Ostracise Prisoners' Information Minister 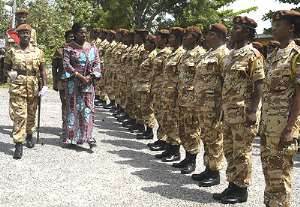 Mrs Oboshie Sai Cofie Inspecting A Guard Of Honour, Mounted By Female Prison Officers At The Nsawam Security Prisons The Minister for Information and National Orientation (MINO), Hon. Mrs Oboshie Sai Cofie has called on Ghanaians not to ostracise or exclude prisoners from society after serving their terms of imprisonment in the country.

“Prisoners need the attention and care of the general public if they are to reform for the collective benefit of society. Every effort must therefore, be made to integrate them so as to empower them to become useful to society,” the Minister advised.

Mrs Oboshie Sai Cofie gave this advice yesterday when she visited the female ward of the Nsawam Medium Security Prisons in the Eastern Region as part of her popular “Media-Walk-About” programme.

The visit gave the Hon. Minister the opportunity to interact with the prison inmates and update them on socio-economic, political and cultural developments going on in the country.

The Minster's interaction obviously rekindled the spirits of the prison inmates and gave them hope in life. She educated them about the need for all-inclusiveness in nation building. Mrs Oboshie Sai Cofie pointed out that as a developing nation, no part of the citizenry should be left out, no matter the conditions in which they find themselves.

An Assistant Director of Prisons, Mrs Charity Araba Magnusen, who welcomed and conducted the Minister and her entourage round, gave a statistical overview of the prison.

She said presently, there are 113 inmates in their custody. 73 of them are convicts, 24 are remand prisoners, three are there on trial, there is one debtor, six lifers, one out of court convict, two convicts on trial, and three condemned prisoners.

According to Mrs Magnusen, the offences for which they were convicted include murder, narcotics, defrauding, stealing, causing damage, causing harm, and soliciting for immoral purposes.

During a tour to inspect some of the facilities and conditions of the detained prisoners, it came to light that there is a vocational training centre, a mother and baby unit, and a fully air-conditioned IT centre – which is however, under resourced.

Every bed is also fitted with a mosquito-proof net. The inmates were seen briskly engaged in their vocational activities like cooking, baking, batik tie and dye, among others.

A counseling and religious centre is in place to deal with the prisoners' moral and psychological problems. The prison has a three acre farm for vegetables and crop plants, as well as an infirmary manned by a qualified medical practitioner.

A representative of the inmates was appreciative of the correctional and vocational measures instituted to reform and empower them for a better living after serving their sentences.

She however, bemoaned the lack of access to legal aid, poor quality of some of the beds, harsh sentences imposed on people who commit petty crimes, and some aged people who have been given stiffer sentences in hard labour.

Hon. Oboshie Sai Cofie promised to confer with her colleague Ministers who have oversight responsibilities for the issues raised, as well as other relevant bodies, agencies, and NGOs to help address their concerns. She later made a donation of assorted items to help in the upkeep of the inmates.

The media walk also saw the Minister visiting a Rural Women, Skills and Development Foundation (RWSDF) training centre for girls at Nsawam. Established in 1992, the Rural Women Skills and Development Foundation offers training in health and micro finance among others. It currently has 85 trainees and much of its support comes from churches and church organisations, a German NGO, as well as government agencies like the Department of Social Welfare.

The last point of call was the Amasaman Chief's Palace where she took the opportunity to bring to light some of government's laudable pro poor programmes like the NHIS, NYEP, Capitation Grant, etc. She entreated the chiefs and elders to educate their subjects to take full advantage of such initiatives.

The Chief of Amasaman, Nii Amasa, was full of praise for the Minister for the visit. He and his elders wanted some of the concerns on some road networks in the district which fell within their jurisdiction addressed. This, the DCE commented, was already being addressed. He explained that the roads in question had already been awarded on contract.

They thanked the government for responding to calls to address their perennial water problems. Nii Amasa noted that the laying of the pipelines had been completed and that soon, the taps will start flowing.

They also had some concerns regarding the relocation of the people of Sodom and Gomorrah to their end. They called for the necessary grounds work, including the establishment of a police post, to be made before the exercise is undertaken.

SSNIT Scandal: Court to decide on mode of trial on December ...
34 minutes ago

A/R: Man caught having sex with sheep on the run
59 minutes ago