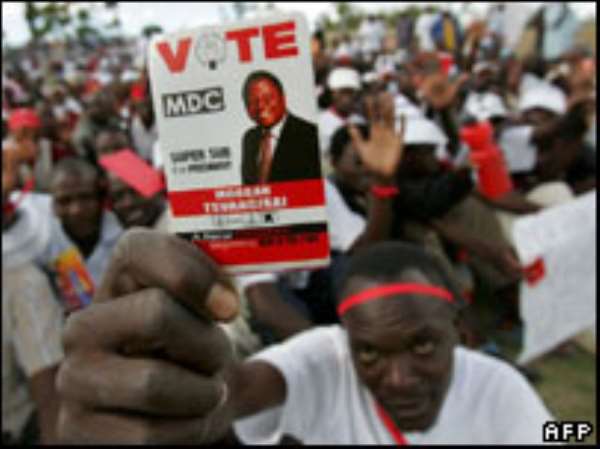 Zimbabwe's security forces have been put on full alert amid fears Saturday's election could spark violence similar to that in recent Kenyan polls.
Candidates are on a final day of campaigning, with the two main rivals to President Robert Mugabe raising fears of widespread vote-rigging.

Mr Mugabe insists the vote is fair and everyone should abide by the results.

About 1,500 people were killed in violence that followed disputed elections in Kenya in December.

The joint chiefs of Zimbabwe's police, army, prison service and intelligence services gathered in Harare to warn that violence would not be tolerated.

Augustine Chihuri, commissioner general of the police, said: "The defence and security forces of Zimbabwe are on full alert from now onwards covering the election period and beyond."

He said they would "thwart all threats to national security".

Mr Chihuri also said candidates would not be allowed to declare victory before official results were announced.

Reports say tanks and vehicles with water cannon are being deployed in parts of the capital.

On Thursday, Mr Mugabe warned opponents not to protest if they lost. "Just dare try it," he said at one of his final rallies.

A BBC contributor in Masvingo in south-eastern Zimbabwe says there is an increased military presence and fly-bys by Chinese-made fighter jets.

One 54-year-old villager told him: "We have been warned that if we vote Mugabe out, there will be war."

In Masvingo city, one resident said he would not be cowed by intimidation: "We do not mind even if they deploy soldiers at polling stations - it's time for Mugabe to go."

His key rivals for president are Morgan Tsvangirai, the head of the opposition Movement for Democratic Change, and Simba Makoni, an ex-finance minister and independent candidate.

On Thursday they issued a joint statement expressing severe concerns about the poll.

They said they had still not received full nationwide voters' lists that could be verified.

The BBC's Southern Africa correspondent, Peter Biles, says one major worry is that there may not be enough polling stations in urban areas.

He says there is also concern about equal access to the media.

The government has accused Britain and the US of already having decided that the elections will not be free and fair.

However, campaigning has been relatively peaceful, with none of the widespread intimidation of opposition activists seen in recent polls.

Both Mr Makoni and Mr Tsvangirai have been able to hold rallies across the country.

A total of 5.9 million people are eligible to vote in Saturday's joint local, senate, assembly and presidential polls.

A candidate must win 50% of the presidential vote to avoid a run-off.

The opposition has been campaigning on Zimbabwe's economic crisis - it has the world's highest inflation rate at more than 100,000% and just one adult in five are believed to have regular jobs.

But Mr Mugabe says land and control of economic resources are the main issues.

He blames a Western plot for the economic troubles.

"The British, the Americans... would rather see our children, the old and the infirm suffer under the weight of their evil sanctions," he said on Thursday.