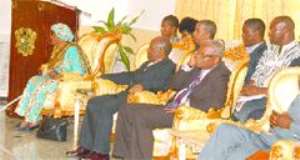 President, J. A. Kufuor of Ghana, is calling for a meeting of the Ghnana Government, the Liberian Government and the United Nations High Commission on Refugees (UNHCR) to work out a programme to repatriate Liberian refugees in Ghana.

He said the repatriation programme should be organised with a human face and with specific time lines so that the cordial relations between Ghana and Liberia would not be hurt.


Receiving a high-powered Liberian delegation at the Castle the seat of government at Osu in accra, yesterday, President Kufuor explained that the repatriation of the Liberian refugees had become necessary because they had expressed dissatisfaction with conditions of life in Ghana.


Besides, the situation which precipitated the need for them to seek refuge in Ghana is no more prevalent in Liberia.

The delegation, which was led by Mrs Olubanke King-Akerele, Minister of Foreign Affairs, delivered a special message from the Liberian President, Mrs Ellen Johnson-Sirleaf, to President Kufuor.

Other members of the Liberian delegation were Mr Philip Banks, Minister of Justice and Attorney-General, Mr Ambulai Johnson, Minister of Internal Affairs, and Mr Gabriel Williams, Deputy Minister of Information.


The delegation was at the Castle, Osu to hold a meeting with President Kufuor and the government to find a middle ground to the recent Liberian refugee problem.


More than 200 Liberian refugees made up of women and children began a demonstration on February 19, 2008, at their Budumburam Camp, stating among other things, that they did not wish to remain in Ghana to be integrated into the Ghanaian society.


Rather, they demanded the payment of $1000 to each of them who opted for voluntary repatriation, preferably to a Western country.


President Kufuor said Ghana and Liberia enjoyed cordial relations even in the country's pre-independence days and said currently some Ghanaian nationals were providing various forms of assistance towards the reconstruction of Liberia.


He said Ghana was, therefore, very reluctant to take any action which could have serious implications for the relations between the two countries.

However, he said, in the face of the continued demonstrations to the point that some Liberian women had to strip naked, and the security implications arising from their action, the Ghana Government had been compelled by the circumstances to seek to repatriate them.


Mrs King-Akerele, rendered an unqualified apology to the Ghana Government for any embarrassment that the Liberian refugees' demonstration might have caused Ghana.


She thanked the Ghana government for receiving Liberians for 18 years and for providing comfort and security at the time of the political turmoil in Liberia.


Ghana, she recalled, played a crucial role in the signing of a peace agreement in Accra, which led to the conduct of elections and return of peace and security to Liberia.


Additionally, she said Ghanaians were helping with the reconstruction of Liberia for which the Liberian people and government were very grateful.


The Liberian Foreign Minister said the delegation had already held meetings with officials of UNHCR and the government and were working out a plan for the repatriation of Liberian  nationals.