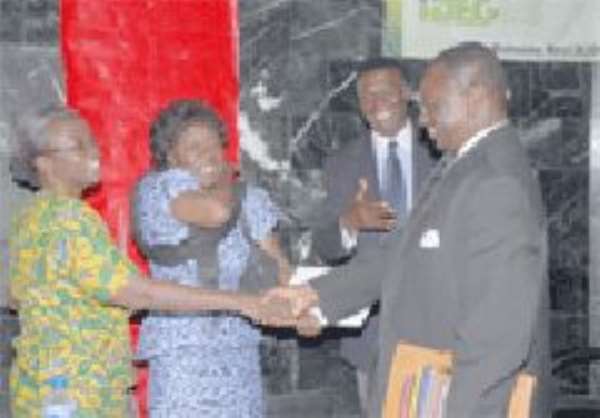 A Former Vice-Chancellor of the University of Ghana, Professor Kwadwo Asenso-Okyere, is cautioning against Ghana concentration on its new find, oil to the neglect of other sectors of the economy.

He cautions that the development would make the economy tumble.


Delivering a lecture on the topic: “Living at the expense of future generations: Innovating for sustainable development,” in Accra Wednesday, he said Ghana needed to guard against the “Dutch Disease” and vigorously develop other sectors of the economy in spite of the discovery of oil.


In the 1950s, the Dutch discovered huge deposits of gas and oil, concentrated on them and failed to focus on other sectors of the economy and that made their economy sink. Since then, any such phenomenon is referred to as the Dutch Disease.


The lecture, organised by the Institute of Democratic Governance (IDEG), an independent non-profit policy research and advocacy organisation, and Joy Fm, a private radio station, took a critical look at the management of resources and its implications for the well-being of the people and for sustainable livelihoods for future generations.


Prof. Asenso-Okyere called for the creation of an escrow account as pertains in Norway and the proceeds from oil sales paid into it for development.


“Otherwise, one day the oil will run out only for us to realise that we have not utilised the monies well,” he cautioned.


Prof. Asenso-Okyere argued that the survival of future generations was being threatened by the present generation and attributed that to greed, insatiable and careless consumption and the blatant disregard for the needs of the unborn.


Prof. Asenso-Okyere, an agricultural economist, observed that the survival of humans, animals and plants was under serious threat because water resources were being depleted through mismanagement.


He said the high rate of rural-urban migration had led to the development of mega cities with a high demand for housing and social services.


The increasing urban population, without commensurate employment avenues, he said, had contributed to increased crime while loose lifestyles, especially in the cities, had led to a high incidence of diseases.


He observed that the development strategies that had generated macroeconomic growth had also widened the gap between the rich and the poor, and created disparities in access to resources for maintaining decent livelihood.


He called for an appraisal of consumption habits and production strategies in order to mitigate their adverse effects on the environment and conserve the livelihood of the future generations adding that, “Poverty begets poverty and unless social protection programmes are built into development strategies to assist the poor and vulnerable, we will be recycling poverty from one generation to the next.”


In a contribution, the President of the Ghana Chamber of Mines, Ms Joyce Aryee, said resources of the earth were finite and called for a sustainable campaign for Ghanaians to change their attitudes and not live at the expense of the environment.