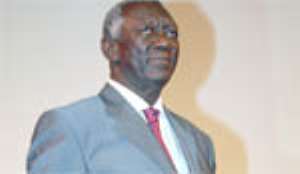 He said even though they behaved in that unruly manner, government would ensure that their attitude did not mar the long standing diplomatic relations between Liberia and Ghana.

The President was speaking at the Castle, Osu, yesterday when he received a 10-member Liberian government delegation which is in the country to deliver a message from President Ellen Johnson-Sirleaf on recent developments at the Liberian Refugee camp at Gomoa Budumburam in the Central region of Ghana.

Mr. Kufuor, who was instrumental in brokering the Liberian peace pact a few years ago, as the chairman of the Economic Community of West African States (ECOWAS), said the claims of the refugees that conditions at their Budumburam camp were harsh were not true.

“They are not worse off than any of the native villages or towns in the area,” he stressed.

The President described his Liberian counterpart as “my sister” and added, “the mood is right in Ghana and we still see Liberia as a sister and we will not allow any miscreants to mar the good relations between us.”

Though he looked diplomatically friendly, President Kufuor did not mince words when he told the delegation members in the full glare of some Ghanaian ministers that their errant compatriots would not be spared if they fell foul of the law.

He said since this is an election year, the Ghanaian authorities would not allow anybody to take the law into their own hands;
“This is an election year and you know what that means. There will always be trouble makers. There are agent provocateurs who might try to harm the fraternal relations between us.”

President Kufuor said it was unfortunate that Ghana, which had been very sensitive to the plight of Liberians since their civil war, was paid back in that ungrateful way.

According to him, since the war had ended, any Liberian who felt like going back home could do so without let or hindrance.

The President therefore suggested that the UNHCR, Ghana and Liberia should, in concert, find a solution to the problem by coming out with “appropriate timetable to send them home so that there will be no hard feelings.”

President Kufuor said available records even indicated that some inhabitants of the Budumburam camp lived there as illegal immigrants and not refugees.

Earlier, the Liberian Foreign Affairs Minister, Ms. Olubanke King-Akerele, who led the delegation, apologized on behalf of her president for the misconduct of the refugees.

She said she had been sent by her president to come and mend any broken fences in the relationship between the two countries following the misbehaviour of the refugees.

She recalled the assistance Ghana, a very hospitable nation, had offered her country during the civil war and after, leading to the conduct of the first democratic elections which Mrs. Johnson-Sirleaf won.

Ms. King-Akerele condemned the misconduct of her compatriots in Ghana and appealed to the Ghanaian authorities to forgive them.

The rest of the meeting, which was held behind closed doors, was attended by some ministers and security chiefs.

It would be recalled that mainly female refugees at the camp, at the instigation of their male counterparts, recently revolted against the Ghanaian authorities and the United Nations High Commission for Refugees, demanding a $1000 allowance and resettlement in a western country, preferably the United States or the United Kingdom.

The female refugees, it was alleged, even went to the extent of stripping themselves naked and lying in the streets to register their protest.

That compelled the police in Ghana to arrest them and send them to the Kordiabe Youth Training Camp in the Eastern region for detention and subsequent prosecution or repatriation.

In a related development, the United States government has issued a statement saying it supports repatriation and reintegration in Liberia for those who fled during Liberia's troubled times but who are now returning home to rebuild their lives and communities;
“The US Government is also supporting UNHCR's efforts to secure local integration as a durable solution for Liberian refugees in countries where they have had asylum”.

The statement explained that since September 30, 2006, the US government stopped accepting new P-3 (family reunification) applications and would only process P-3 cases filed in the United States before the deadline.

“To qualify you must be the parent, spouse or unmarried child (under age 21) of a Liberian already in the US. You must also remain outside Liberia and demonstrate that you have a valid refugee claim. We understand that there are some people purporting to be agents registering people for resettlement in the United States. You should be aware that these people are frauds,” the statement warned.