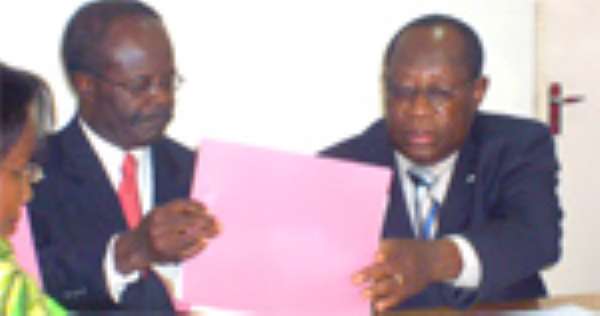 DR PAA Kwesi Nduom, the presidential candidate of the Convention People's Party (CPP) has told ecstatic party supporters at a rally in Kumasi that, when voted into power in the December 7 general election, he will use a maximum of 100 days to revamp all dormant factories and industries in the country.

“Within 100 days of my stewardship as the president of the republic of Ghana, the shoe and jute factories in Kumasi, the Asutware sugar factory, the Pwalugu Tomato factory in the Northern Region as well as other scores of factories scattered all over the country which are currently dead or ineffective would be revived,” the presidential candidate underscored amid thunderous applause.

He stated that the promise was not an empty one which could not be fulfilled because the CPP since the birth of the country had amply demonstrated that it had the capacity to create jobs.

“It was not for nothing that the first president of the country, Dr Kwame Nkrumah built factories and industries across the length and breadth of the country,” Dr Nduom observed.

He said the greatest challenge of the country since the unwise overthrow of the CPP government in 1966 had always been unemployment, especially among the youth.

He assured that another CPP government will keep faith with the people by creating job opportunities for the teeming youth to upgrade their standard of living.

The former Minister of Public Sector Reforms therefore enjoined the large enthusiastic crowd at the mini rally in Prempeh Assembly hall to vote overwhelmingly for him because he is the only person with the right acumen to provide meaningful jobs for them.

Referring to himself as 'Adwuma wura' to wit, 'Master of jobs', the economics kingpin noted that amongst the presidential candidates bidding to become the next president of Ghana, he is the only one who has proved beyond reasonable doubt that he has what it takes to create jobs.

“Even not as a president of the country, I have created jobs all over the country which have employed a sizable number of the populace,” he contended.

The presidential candidate argued that the success story of the stabilization of the economy cannot be mentioned without his good name.

“As the Minister of Economic Planning at the time I joined the NPP's all-inclusive government, I worked meticulously to contribute towards the stabilization of the economy,” he emphasized.

Dr Paa Kwesi Nduom said since there were several problems facing the one time prosperous and great nation even after the NDC and NPP had both ruled the country for eight years, it was time for the CPP to take over the reigns of government to correct the wrongs of the past.

The presidential candidate indicated that never again will the CPP perform so poorly in an election like it did in both the 2000 and 2004 elections where the party recorded less than 1% of votes cast.
“I am assuring you here today that the CPP you see today and will be seeing in the days to come is tremendously different from the one you saw in 2000 and 2004,” he said.

He urged the party members present to spread the good message of a revitalized CPP to attract the support of both opposition party members and floating voters.

The National Chairman, who was one of the executives accompanying the flagbearer, entreated the media to stop asking the CPP which party they would join in case of a run-off in the December 7 elections, and rather ask which of the parties will join the CPP in such a situation because “the CPP is destined for electoral victory this year”.

The General Secretary of the party, Mr. Ivor Greenstreet, urged the electorate to vote for CPP because it is the only party currently in the system which is youthful, has dynamic leaders, and is being led by a visionary and committed presidential candidate.

“Compare our national executives and the flagbearer to that of the other parties and you will come to a conclusion that they are the most youthful with dynamic ideas,” he pointed out.

Dr Kwaku Osafo, a former presidential aspirant of the party who spoke on behalf of his three colleagues who were not in the delegation, namely Prof Badu Akosa, Mr Bright Akwetey and Dr Kwame Akufo, pledged their support and commitment to Dr Paa Kwesi Nduom.

He promised the electorate that a CPP government would provide affordable housing for the vulnerable in the country, and also ensure that local artisans were given requisite national support to manufacture cars for local use.

Earlier in a welcoming address, the regional chairman of the party, Mr S.K. Danso said unlike previous perception that the CPP was for the aged, the party was now attractive to the youth who continue to join in large numbers.

He gave hint of the regional secretariat's resolve to work hard day and night to win more support for the party so that the region becomes the stronghold of the party in the December elections.