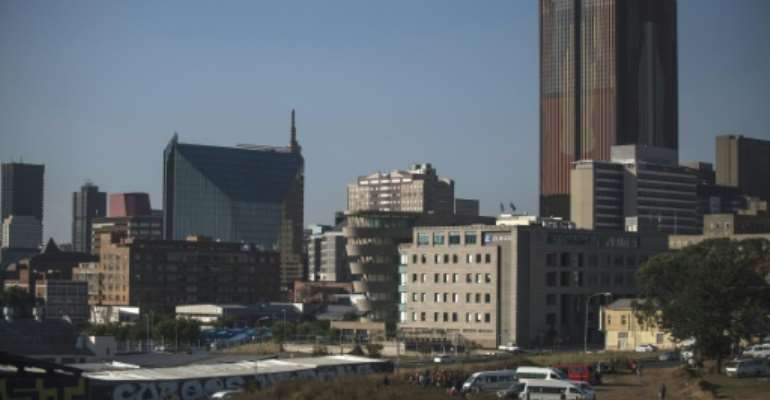 South Africa's economy has struggled due to the electricity crisis and high unemployment as well as a fall in commodity prices and the rand. By Mujahid Safodien (AFP/File)

The slowdown was across the board, with manufacturing, mining and agriculture industries lagging the most in Africa's most developed economy, plagued with nationwide power cuts and high unemployment.

"The real economy in the second quarter has performed negatively," Statistician-General Pali Lehohla told a press briefing in Pretoria.

In a commentary note on Monday, Nedbank had predicted GDP growth of 0.3 percent after first quarter expansion of 1.3 percent.

The economy has struggled due to the electricity crisis and unemployment of about 25 percent, as well as a slump in commodity prices and the falling rand.

The rand hit an all-time low on Monday, breaching 14 to the dollar as jittery investors disposed of high-risk assets in the wake of slowing economic growth in China.

Lehohla said that for South Africa to capitalise on the weak rand, the government would have to address deep-rooted issues hampering growth.

"Things being equal one would have expected manufacturing would boom when the rand touches 14 a dollar," he said.

In July, Lesetja Kganyago, governor of the South African Reserve Bank, revised down the bank's growth forecast to 2.0 percent in 2015 and 2.1 percent in 2016.

"One can't rule out the possibility of a recession in South Africa," Jana van Deventer, an economist at ETM Analytics, told Bloomberg News.

Compounding things further, South Africa is suffering from the worst drought in years which has damaged its profitable corn crop.

Load-shedding -- regularly scheduled power cuts to reduce energy usage -- has become part of everyday life for many people and companies.

State-owned power utility Eskom, which generates more than 95 percent of the country's electricity, has been weakened by years of underinvestment and ageing infrastructure, as well as governance problems.

Tuesday's statistics revealed manufacturing contracted by an annualised 6.3 percent, mining also by 6.3 percent and agriculture by a whopping 17.4 percent.

"I think the shock just came home much more quickly than we thought it would do," said Peter Montalto, economist at Nomura.

"Particularly on manufacturing and agriculture, it was a surprise for us."

Montalto said it was unlikely that South Africa's government would make any big policy changes soon.

"Part of the problem, to be honest, is this slow grind of under performance," he said.

"South Africa needs to have a shock to the system, which it arguably has had through Eskom, but that hasn't been enough to shift the political status quo."