Speaker Of Parliament Acts As President Of Ghana 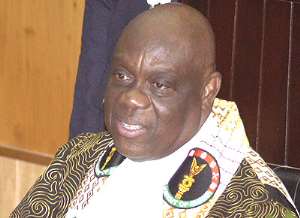 This followed a communication informing Parliament of the absence of President John Agyekum Kufuor and Vice President Alhaji Aliu Mahama from the country.

The Chief Justice who entered the chambers of Parliament around 20:28 hours, administered the oaths, which ushered the Speaker to his new appointment.

Mr Hughes, who had been presiding over proceedings in the House, left immediately after being sworn in.

Mr Alban Bagbin, Minority Leader, had to suspend his submissions on the floor of the House to make way for the Chief Justice to perform the swearing-in.

When he took the floor again to resume his submissions, the Minority Leader congratulated the Speaker on his assumption of office and expressed the hope that he would leave behind a legacy.

Mr Bagbin jokingly said that the acting President should take advantage of his new position to do a quick reshuffle of ministers.

President Kufuor, who travelled to France yesterday, is expected back on the 22 of this month.

Budget approval: NDC and Adwoa Safo’s PA engage in ‘It’s her...
14 minutes ago