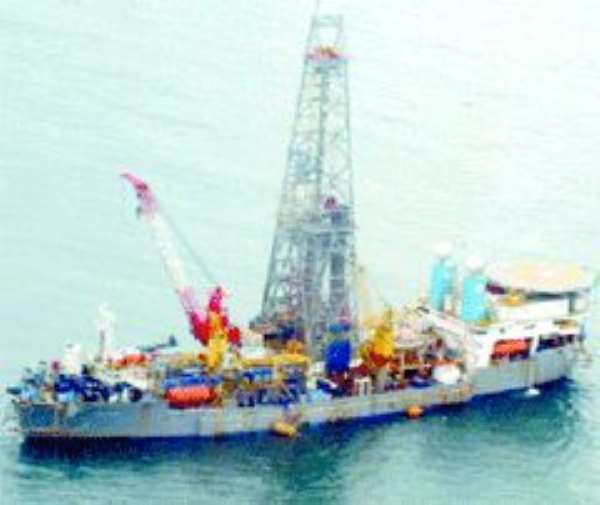 Activities of fishermen along the coast of the Western Region are posing a serious threat to the oil exploration activities currently taking place off the coast of Cape Three Points.

The fishermen are said to be blasting dynamite to trap fish that gather around the bright lights produced by the rig at night.

Experts say the use of dynamite, coupled with the tying of nets­ and boats to the leg and the anchor ropes of the rig, could cause the rig to explode and prematurely end the country's dream of becoming a member of the oil-producing countries.


Sources at the Western Regional Office of the Fisheries Department explained that naturally fish were attracted to light at night and, therefore, the navigation and other security lights on the rig would attract fish.


They said the fishermen had capitalised on the absence of patrols by the Ghana Navy, who are under-resourced to carry out effective surveillance, to turn the area around the rig into a fishing arena, using dynamite and other unapproved fishing methods.


As an interim measure to curtail the activities of the fishermen, the Western Naval Command is taking steps to position its men and some divers along the rig to protect it and the workers on board.


Officials of the Ghana National Petroleum Corporation (GNPC) have also gone to some communities along the coast from Sekondi to Half Assini to educate the people on the dangers associated with fishing with explosives around the rig.


Explaining the dangers associated with the activities of these fishermen to the Daily Graphic, Mr Isaac Botchway, a Geologist with the GNPC, said the fishermen tied their nets around the leg of the rig, as well as the anchor ropes of the ship.


“Therefore, during drilling, the nets gets entangled with the leg and all activities have to come to a standstill. Divers have to disentangle the nets before work can continue,” he said.


Mr Botchway said the company involved in the exploration was threatening to suspend its well-drilling activities if the fishermen refused to respect the rules governing their activities.


“Our information is that the number of boats fishing around the rig at night has increased and almost every day the equipment used to drill the well get entangled with the nets,” Mr Botchway added


He said the company was incurring extra cost, since it had to pay divers to disentangle the nets from the leg of the rig, saying, “This is not about paying the money but the process of disentangling the nets is very dangerous.”


When contacted, the Western Naval Commander, FOC F. Dalley, agreed that the activities of the fishermen could be disastrous, for which reason the Navy would treat the matter with urgency to avert any danger.


The commander said although the Navy needed logistics to enable it to take total control of the situation, it could still take some steps to ensure that the fishermen were cleared from the place.


“It is about time the fishermen realised the value of the investment and what the country stands to gain for the enhancement of its socio-economic development,” the commander said.