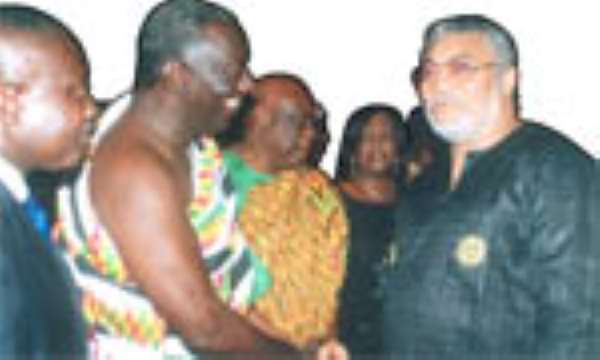 “The end, they say, justifies the means”. Anything which has a beginning has an end, so is the adage.

The Kufuor administration is gradually creeping to its constitutional end as it was with former Chairman/President Rawlings' reign as the head of state of the Republic of Ghana.

The year 2000 marked the beginning of a millennium and the end of the long rule of Jerry John Rawlings after 11years as military head of state and subsequent metamorphosis into 8 years of “civilian” rule.

This end, unlike that of 1979 when Rawlings left power only to return through the barrel of the gun, could be described as never-to-return one. The constitution of Ghana bars him from ascending the throne to rule Ghana ever again.

The beginning of the Rawlings chapter in the governance of the Republic of Ghana clearly showed how the end would be -“Peacefully Violent”.

It was peacefully violent because Ghanaians were tolerant enough to ensure that the violence that characterized that era did not degenerate into bloodshed. Unremarkably, events which took place in the year 2000 (the end of the Rawlings chapter) reinforced the beginning of the Peacefully Violent era.

The mention of the end of the Rawlings regime brings to mind the suffering that Selassie Dzentu, a former boyfriend of the daughter of the head of state, went through in the hands of the regime at the very seat of government.

He was abducted and given what was described by Mrs. Rawlings as 'identification haircut' by guards at the Castle, seat of Government. This haircut was done with the edge of broken bottles and old blades. Subsequently, his parents had to suffer jail terms for crying out loud.

This Dzentu family was only saved by the public uproar which greeted the inhumane manner in which they were treated by the regime.

A section of the media which was deemed by the regime as treacherous was “shit bombed”; some of them had their editors arrested and denigrated publicly. Yet the media did not relent in its efforts at fighting against the injustices in the end time of that era.

The Akufo-Addo and Prempeh Chambers had a huge task of defending, bailing and ensuring that the media gurus who were arrested and prosecuted under the criminal libel law were set free. This was also successful with the help of public outcry.

In the Rawlings end time, politicians who were in opposition were not left out of the inhumane treatment meted out to all “against people”.

It would be recalled that the then candidate of the New Patriotic Party (NPP), John Agyekum Kufuor, was detained by the BNI alongside some Italian friends who visited him in the year 2000.
While opponents of the regime were being dealt with drastically, the economy of the country was left to slump into recession.

The economic recession was so rapid that some major banks in the country had to be liquidated. The Bank for Housing and Construction and the Co-operative Bank were both liquidated in the last year when the regime was busily dealing with people deemed perfidious.

The fall of the cedi against major trading currencies was colossal. Traders preferred to trade in the US Dollar rather than Ghana's own currency. This is because the price of almost every commodity was determined by the dollar rate against the cedi.

Interest rates were 40 percent plus while inflation was flying over and above normal. Inflation was over 45 percent by the close of the Rawlings Chapter in the history of Ghana.

The economy became so unstable that no one could predict what the future would be like.

Alas, the head of the Government's Economic Planning Committee was the then Vice President of Ghana, Prof. Evans Atta Mills who is currently seeking to be elected as the President of Ghana on the ticket of the NDC for the third time.

It is not surprising that Ghanaians have refused to put the governance of the country in the hands of the former Vice President, even though he was anointed by the then departing President of Ghana, Rawlings. Prof Mills is now desperate for the opportunity to run the country's economy again.

The defeat of the anointed son of J J Rawlings, Prof Atta Mills by the Gentle Giant J A Kufuor in the December 2000 Elections brought so much excitement to the people of Ghana. That victory marked the end of human rights abuses and the ushering in of true freedom of speech in the Ghanaian society.

The Kufuor led NPP-Government started to manage the affairs of Ghana in 2001 on an “empty stomach”, as the typical Ghanaian would describe it.

There was a publication in a private newspaper attributed to Ekow Spio Garbrah, a leading member of the NDC government, saying, “Now that they've won we shall see where they will get money to run the country”.
It was widely believed that the predecessor of NPP did not leave any money in the national kitty for the running of the country.

The Kufuor government therefore had to beg Nigeria to supply crude oil on credit to Ghana for three months else economic activities in the country would have been brought to a standstill.

Nigeria had to agree even though Ghana already owed it millions of dollars for unpaid oil.

As first measures at ensuring that the economy of the country stayed afloat, the Kufuor Government immediately put in plans to stabilize the cedi against major trading currencies.

In support of the government's measures to sustain the economy, traders at Abbosey Okai (a vehicle spare parts dealer hub in Accra) reduced prices of their commodities. This kind gesture was spearheaded by Ghana Union of Traders Associations (GUTA). The year 2001 saw the stabilization of the Ghanaian economy under the Kufuor government. The cedi became stable and interest rates and inflation started dropping.

A lot happened along the journey to the last year and last term of office of the Kufuor Administration.

In Kufuor's end time, events which are taking place are in a way cementing the beginning of his administration.

The acute energy crisis which hit the country in the later period of the Kufuor administration is replica of the financial drought which the government suffered when it took over power.

The country's energy problem was a great threat to its economic sustainability. The crisis sought to erode all the successes chalked from the beginning of Kufuor's two terms of office.

But with the support and understanding of Ghanaians, the government was able to resuscitate the energy situation.

The boom in the financial sector and the generation of employment seems to be going very well with the populace. Now young men and women are trying to climb up the educational ladder to enhance their qualifications and skills so that they would get the jobs of their choice.

There have been some “fevers” in the Ghanaian system during Kufuor's end time. These include Ghana's 50th Independence Anniversary Celebrations, the African Cup of Nations where Ghana won bronze, the four-day visit of US President George Bush, and forthcoming 2008 election fever.

Ghana has discovered oil deposits off the shores of Cape Three Points. It is hoped that the oil will be extracted in time to augment the excitement in the hearts of the Ghanaian.

Fingers are crossed and waiting for the day Ghana would be named as a member of OPEC (Organization of Petroleum Exporting Countries).

Would Ghana become the replica of Qatar, which has been transformed from a poor desert island to a rich nation by oil or that of Nigeria, where there is abundance of oil and yet poverty?