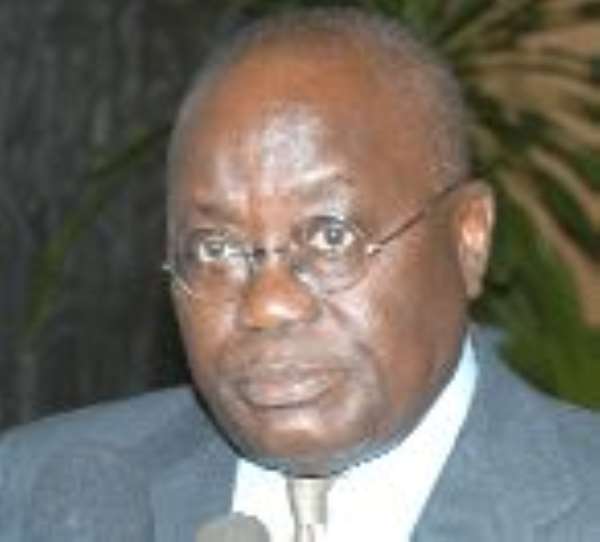 The flag bearer of the New Patriotic Party (NPP), Nana Addo Dankwa Akufo-Addo, has inaugurated his national campaign team and charged them to ensure that the party increased its majority in Parliament and win the 2008 general election.

The team is made up of an Advisory Board headed by Mr Peter Mac Manu, National Chairman of the NPP and a national campaign committee, which is under the chairmanship of Mr Jake Obetsebi Lamptey, with Dr Kofi Konadu Apraku as its director with two deputies, Mr Roland Saka for the northern sector and Ms Sophia Horner-Sam for the southern sector.


Introducing the team at a press conference at the party's headquarters in Accra yesterday, Nana Akufo-Addo also used the occasion to lay out his blueprint for the 2008 general election.


The membership of the advisory board include all the 17 other former presidential aspirants of the party, together with Mr A. K. Deku, acting Chairman of Council of Elders, Mr Kwadwo Mpiani, Minister of Presidential Affairs, and the two national Vice-Persons of the party, Mrs Agnes Okudzeto and Alhaji Abdul Rahman Musa, the General Secretary, Nana Ohene Ntow, and the presidential candidate.


According to Nana Akufo-Addo, based on the excellent achievements of President J.A. Kufuor, the next NPP government is best positioned to implement its new priority programmes through the implementation of fresh ideas that will continue to make the country better.


He said an Akufo-Addo government would have four central thematic areas, namely, the continuing consolidation of democracy, modernisation of the society, structural transformation of the economy and the full engagement of Ghana in the process of regional and continental integration.


Although Nana Akufo-Addo did not specify the roles and functions of the campaign team, he said the team would work in conjunction with regional, constituency and polling station executives of the party.


Explaining his four thematic areas, he said his administration would deepen democracy by reinforcing the institutions that secure the rule of law, fighting corruption vigorously, strengthening the process of decentralisation to give local communities more resources and a bigger voice in decisions that affect their lives.


On modernising the society, he said this would be done through the protection of the environment, re-planning towns and cities and stringently enforcing the existing rules and regulations and doing so humanely.

This he said is to ensure that the nation maintained a proper balance between rights and responsibilities and actively promoting the arts and sports, as well as instilling a greater sense of patriotism, confidence and pride in the average Ghanaian.


Expatiating on the transformation of the economy, Nana Akufo-Addo said his administration would focus on the production of value added goods and services, pursuing policy of empowering Ghanaians economically as a means of encouraging the accumulation and investment of Ghanaian capital locally and from the Diaspora.

It also aims at making the formal sector more attractive to the majority of local economic operators and investing a substantial percentage of the nation's Gross Domestic Product in research and development.


He said he would work to exert leadership on the African continent by helping to resolve conflicts, enhancing security, consolidating multi-party democracy, and promoting regional and continental integration in allowing free movement of people, goods and services across borders.


He called for the acknowledgement of the great strides the nation had made under the NPP, “yet we must also have the humility to appreciate that we still have a long way to go.

We need to accelerate the development of our national economy so that opportunities will abound especially for the youth”.


Nana Akufo-Addo said because the welfare of the youth remained the major preoccupation of the nation, it must grow its GDP from the six per cent rate to 10 per cent systematically over the next decade to reduce poverty in the country.


He called on the Electoral Commission (EC) to ensure that arrangements for the 2008 elections would secure a free, fair and transparent election “whose results cannot legitimately be questioned.

There will be no justification for any group of people to disturb the hard-won peace of our country and to instigate the shedding of even a single drop of Ghanaian blood”.


Mr Mac Manu said the NPP had confidence in the EC but acknowledged the fact that as a human institutions it would commit some errors.

However such lapses must not be given sinister interpretation that might degenerate into any nasty situation in Ghana.


“We have taken note of the fact that leaders of the NDC have started a campaign on accusing the NPP of setting out to rig the elections.

We have no iota of doubt in the NPP that the NDC has prepared a game plan whereby they intend to discredit and demonise the EC by feeding lies to the public,” he said.


He added that this was to prepare the grounds to reject the results of the election which they must now realise they had lost given the sterling performance of the NPP in the past seven years.