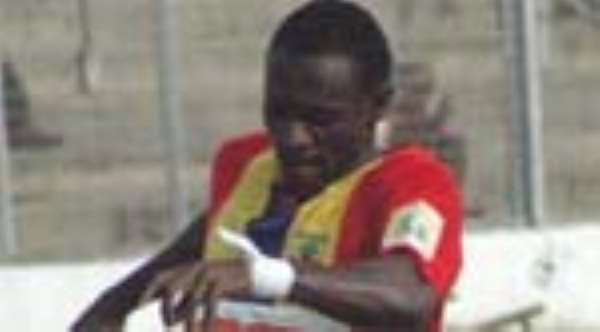 Drama unfolded in the 12th week outstanding match between Hearts and Kotoko at the Ohene Djan Stadium in Accra yesterday when reserve players of both teams exchanged harsh verbal words on the field during recess.

However, the timely intervention of security operatives on duty calmed tempers.

Though what necessitated the whole drama was not immediately known, it was believed the three balls that Kotoko's substitute players carried onto the field drove the puzzlement.

Notwithstanding that, the match indeed lived up to its billing as the “El Classico” with both teams exhibiting great artistic play with tactical ingenuity at its best.

Hearts' Israeli coach, Eyal Lachman's strategy of Daniel Coleman man-marking Eric Bekoe, the leading goal-scorer in the Onetouch premiership, rendered the marksman almost inactive in the first half though he delivered three brilliant shots in the second half which all missed the goalpost by inches.

For instance in the 34th minute, when Bekoe beat the Hearts defence, he nearly wrote his name in the goal scoring booklet.
Again Lachman's three central defensive play, where Coleman, Ofei and skipper Kwabena Boafo combined, prevented the in-form Kotoko attack from causing any havoc.

On the other hand, Kotoko's coach Bashiru Hayford also employed good tactical game-plan which nearly saw the match going in his favour especially in the dying embers of the game.

Both coaches played the 4-4-2 formation with Kotoko a bit ahead in midfield where former Feyernoord's Jordan Opoku combined effectively with Daniel Ani Adjei.

The match which could have gone either way began on a fast note with Kotoko slightly on top in the first 10 minutes which saw two Hearts players attracting yellow cards. Michael Donkor who had an outstanding game and Solomon Amoasi were the early culprits in the game.

However, when the new-look Hearts took over the game, they looked unstoppable with striker Ekow Ghansah, Eric Gawu and Eric Nyarko dazzling the crowd.

Twice in the 22nd and 28th minutes, Hassan Mohammed who was substituted for Reuben Senyo, failed to score with goalkeeper Souleymana at his mercy.

Kotoko also nearly scored in the 36th and 45th minutes from Jordan Opoku's brilliant 25 meters kick and a goal-mouth melee.

During the second half, Kotoko who introduced Nana Arhin Duah and Ofosu Amoah looked a bit stronger than Hearts but the agility of goalkeeper Laud Quartey on about three occasions denied Kotoko a goal.

Out-of-favour Dong Bortey, who came on in the dying embers of the game, also brought some life into the match.

On the whole, it was an impressive game with struggling Hearts matching the in-form Porcupine Warriors boot-for-boot.