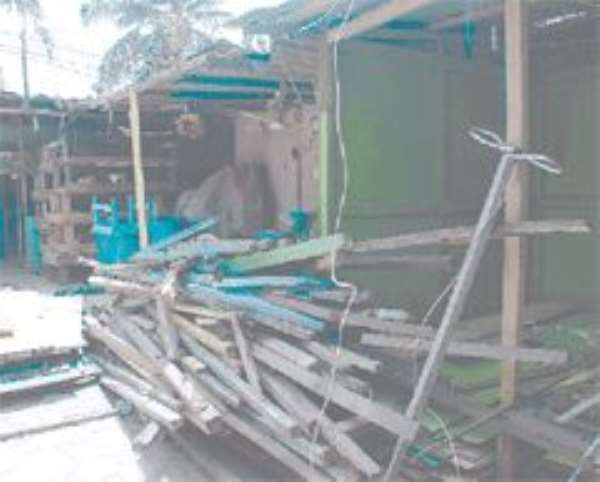 THE owners of Soldier Bar, a popular brothel at the Kwame Nkrumah Circle in Accra, yesterday pulled down parts of the structures used for their operation.

Observers described the dismantling of the structures as a ploy by the owners to avoid its imminent destruction by state agencies, following a visit to the area by some Members of Parliament (MPs).


When the Daily Graphic visited the joint, the owners had dismantled some of the cubicles used by sex workers, some of whom are said to be as young as 12 years.


They were seen holding hammers and other implements removing plywood and roofing sheets under the supervision of Odom Bens, the caretaker.


When this reporter asked of Thomas Okine, the owner of the bar, Odom said he travelled to Canada four months ago.

Odom denied that they used the cubicles for prostitution, and added that he only sold beer and operated a communications centre.


He insisted that those caught having sex in the cubicles in a recent police swoop in the area were all workers of Soldier Bar and its subsidiary water producing company, “One Love” at Adjiringano, who were there with their girlfriends.

Odom said they had 52 workers, but could not explain how all of them were caught in the act at the same time.


Neither Odom nor his supporting staff could produce a working permit or a registration form from the Registrar General's Department for the brothel, which he claimed started operations 14 years ago. He, however, produced a membership certificate with the National Drinking Bar Operators Association, Ghana (NADB).


He said the Accra Metropolitan Assembly (AMA) officials had come for the work permit and registration form for verification, but was not certain of the office or the names of the officials.


Odom denied that the dismantling of the cubicles was a camouflage and that it was done out of fear that the MPs who visited the place might call for the demolition of the brothel.


He said he carried out the exercise to send signals outside that the Soldier Bar was not into any sex work, and that it was purely a beer bar.


Odom accused owners of adjacent structures of engaging in sex work, and wondered why the blame was always on Soldier Bar.


The Parliamentary Caucus on Population visited the brothel last Friday and warned that it would not hesitate to close down or demolish the bar, reports Rebecca Quaicoe Duho.


The Chairman of the caucus, Madam Theresa Tagoe, and other members expressed their shock and disgust at the horrible conditions under which people, including children, practised prostitution there.


The brothel was in the news last December after more than 150 suspected prostitutes including children were rounded up by the police.


The parliamentarians were accompanied by some members of the Ministry of Women and Children's Affairs, the police, CID, Social Welfare and the Department of Children.


The brothel, which is situated behind the Airport-Circle taxi ranks, has a drinking bar at its frontage with over 50 cubicles behind that have been operational for years with the young and old as patrons.


The cubicles, which are about 4 feet x 8 feet, has only a make-shift bed and mattress in them with the doors, which are often locked when occupied, serving as the only ventilation. It also has four smaller cubicles serving as bathrooms and toilets, which are also used by the prostitutes.

The area where the brothel is situated stinks and poses a health hazard to its occupants as it is near a big gutter.

Although there is a “stop work” notice, said to have been written by the Accra Metropolitan Assembly (AMA), on one of the structures, business is still booming as the place is still operational.


The Chairman of the caucus, Madam Theresa Tagoe, in an interview said the caucus would meet tomorrow, to take a final decision which would be sent to Parliament for action to be taken on the place.


She said the brothel was dehumanising and did not understand why people would want to have pleasure in such places.

Madam Tagoe said it was the duty of the members to protect the interest of all people including children and, therefore, would not hesitate to recommend its demolishing.


The Greater Accra Regional Co-ordinator of the Department of Children, Mr Peter Akyea, who was with the MPs, in an interview said three of the 14 teenage prostitutes detained during the raid in December, who were found to be pregnant after medical checks, and four others already with babies, have been rehabilitated and reintegrated into vocational training centres in their various communities.