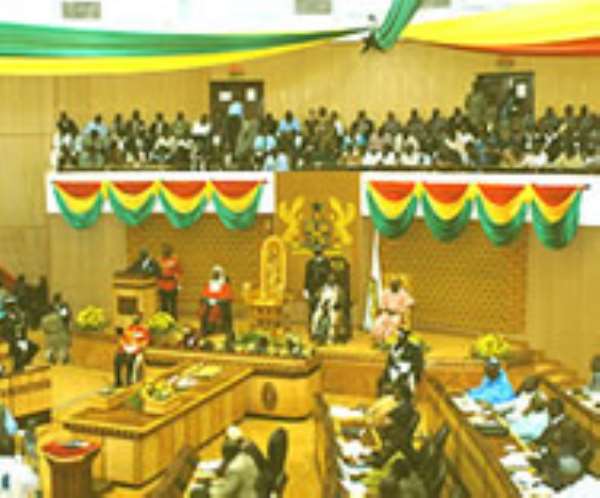 The incidents were triggered by statements made by Hon. Simon Osei-Mensah NPP MP for Bosomtwi for what the Minority described as unwarranted and disrespectful statements about former President Rawlings.

The House was debating the State of the Nation Address of President Kufuor which began on February 19.

Hon. Akua Sena Dansua NDC MP for South Dayi did not take kindly to references that Hon. Osei-Mensah made to former President Rawlings and Manuel Junior Agogo, a member of the national team, the Black Stars.

Hon. Osei-Mensah went to the chamber of Parliament with a poster showing Junior Agogo, his mother and former President Rawlings as he made contributions about the successful organisation of the recently held African Cup of Nations tournament which Ghana hosted.

He mentioned the tournament as part of the successes and achievements of President Kufuor. The MP said, with the poster as evidence that, the tournament had re-united families, with specific reference to the re-unification of Junior Agogo with his uncle former President Rawlings.

The MP said, he did not know that the two were related until the games had brought them together.

In response to Mr. Osei-Mensah's showing of the poster to the House, Hon. Dansua said he should stop being a clown, claiming that he was taking his humour too far in the House, insisting that the House was a serious place.

Her anger apparently was due to the fact that the MP said it was the tournament that re-united former President Rawlings to his nephew, whom he did not know before.

Hon. Kwabena Adusah Okerchire, Majority Chief Whip drew the attention of the Speaker, Hon. Freddy Blay to the use of the word clown in describing Hon. Osei-Mensah.

The Speaker then asked Hon. Dansua to apologise and withdraw the word, and she did.

In an interview with Fred Tsidi of Citi FM, Hon. Osei-Mensah claimed that he was only using the poster as evidence to support his statement, arguing that it is the practice in parliament where members often used material evidence to support their claims.

At a point during the hot argument, Hon. Osei-Mensah remarked that, “we have come from different backgrounds, some are brought up, while some are reared.”

Explaining her position on Citi FM, Hon. Dansua said she did not call her colleague MP a clown, but instead, said he was behaving like a clown. She however, added that she was compelled by the Speaker to apologise and withdraw the comment.

In an answer to why she said that to her colleague MP, she told the Citi FM anchor, “you would have done the same if you were in the Chambers today.”

She argued further that what the MP did was disrespectful to former President Rawlings.

When she was asked if she would have done the same thing to another MP from her side, she answered, “I was only trying to bring him to order.”

In another development, a Member of Parliament was asked to leave the Chamber for improper dressing.

The MP Hon. Kofi Frimpong, NPP Member for Kwabre East was not allowed to make comments on the floor of the House because his dressing violated the dress code of the House.

As a result of these exchanges, Parliament was unable to conclude the day's business.