No bloodshed at elections-Nana Akufo Addo 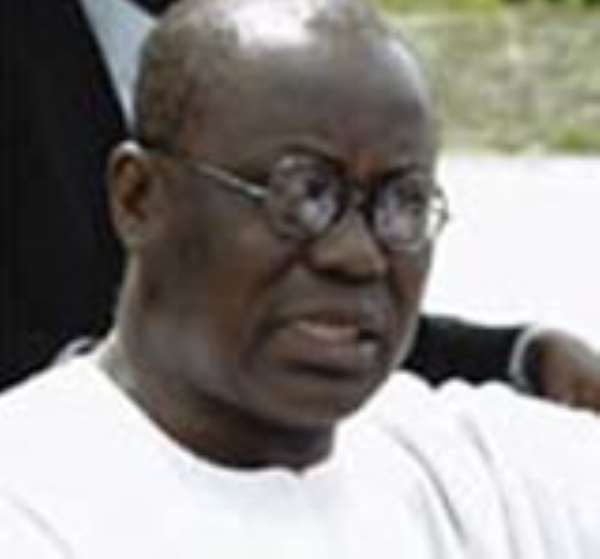 
Nana Akufo Addo, the NPP presidential candidate has said that the country would never be plunged into bloodshed as a result or this year's elections as has happened in some countries in the region.

He noted that this year was the time when Ghanaians needed to maintain peace because it was an election period when the nation's democracy would be put to the test.

The NPP leader therefore urged all to register, especially the youth who attained the age of eighteen to enable them to participate in the decision making process of electing the next leader for the country, stressing that that was one crucial contribution they could make towards the development of the country.

He said for the New Patriotic Party, (NPP) he observed that the development and future of the country largely depended on the political decisions made by the youth whom he noted form majori¬ty of the population in electing the next president.

He was addressing the students of Akpafu Secondary Technical School at Mempeasem, after he had paid a courtesy call on the President of the Volta Regional House of chiefs Togbega Gabusu IV.

He remarked that the NPP under the leadership of President Kufuor had performed creditably as more development projects were execut¬ed across the regions adding the there was the need for Ghanaians to vote for him to enable him to contin¬ue with what he called uncomplet¬ed development plan for the coun¬try.

Nana Akufo Addo emphasized that when voted as the next presi¬dent, the focus of development would be industrialization to help strengthen the economy as a policy of the NPP administration and said iron deposits at Akpafu and other mineral resources would be har¬nessed to improve the living stan¬dards of the people.

The Deputy Minister for Lands Forestry and Minds, Madam Rita Tani Iddi said mining was one of the important economic develop¬ment areas and pointed out that her ministry identified some areas in the country as potential mining areas but continued to carry investi¬gations into the viability of com¬mercial mining including Akpafu.

She said government was doing everything possible to develop the country's natural resources and commended the chiefs and people of Akpafu for the institution of the iron festival to create awareness about the, minerals in the area.

The Volta Regional Minister Mr. Samuel Kofi Dzamesi said the govern¬ment had formulated a number of development plans for the region and disclosed that a 3.5 billion old cedis dormitory was being con¬structed for the Akpafu Secondary Technical School.

He also announced two important roads in the Akpafu area which would be tarred this year.

The President of the Volta Region House of Chiefs Togbega Gabusu IV commended Nana Akufo Addo for the respect he accorded chiefs and urged the various flag bearers and their support¬ers to ensure that the electioneering campaign was free from insults and acrimony.

The traditional ruler pointed out that supporter of the different political groups should not see each other as enemies saying that belonging to a party should not in any way create problems because that was the essence of democracy.

He also expressed concern about the slow pace of work on the Hohoe town roads and appealed to the government to speed up work on the road.

The Paramount chief of Akpafu, Nana Kofi Adu II presented a stool with an elephant as a symbol to Nana Akufo Addo to honour him for his willingness to attend the fes¬tival and for winning the presi¬dential race of the NPP.

However the anticlimax of the day occurred when the St. Francis Training College bus that carried some party supporters to the festival were involved in an accident when they were returning to Hohoe.

About 50 people who were in the bus sustained various degrees of injury and some victims of the accident alleged that the driver was under the influence of alcohol.

One person reportedly died from his injuries.

Meanwhile, the accident victims are receiving medical attention at the Hohoe Government hospital.

Nine of them who were seriously injured were transferred to the Volta regional hospital.

The rest were Mr. Kenwuud Nuworsu, Deputy Minister for Manpower Youth and Employment who doubles as the Volta Regional Chairman of NPP and the Hohoe Municipal Chief Executive Mr. John Peter Amewu.