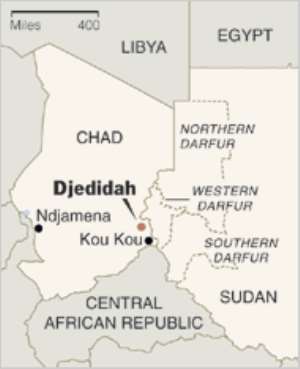 With more than 1000 people massacred in Kenya over elections dispute, news filtering in from Chad in the last few weeks is depressing. While the crisis in Kenya appears to be simmering down, more than a million people have been forced to leave their normal place of abode in Chad. There have been exchanges of gunfire between the government forces and rebels as the latter are poised to remove the incumbent president.

The situation in Chad evokes images of African countries that had similar poor political and economic profiles-Liberia, Chad, Kenya, Sudan, Somalia to name a few. What appears to be responsible for this plethora of crises has been a constant struggle for political power for groups that had been excluded from the spoils of economic progress and fraudulent electoral processes.

In the last four decades, Chad has remained a highly unstable country. The crisis began shortly after independence. The political control of the country went to the southerners causing a revolt of the northern Chadian tribes against the south in 1966. This started a cycle of civil conflicts, which, after a period of uneasy peace between 1990 and 2004, has blown up again. In 2006 a peace deal was signed but it only lasted for two months. Shortly after, a massacre took place in the eastern Chadian village of Djawara with over 100 civilians either shot or hacked to death by Sudanese Janjaweed militia and local Chadian rebels.

Chad is one of the poorest in the world. Over 80% of Chad's population relies on subsistence farming and livestock raising for its livelihood. Last year, the government committed itself to spending 70% of its budget on development needs such as increase in access to healthcare delivery and education. However none of this materialized. The Chadian government is widely seen by many Chadians as corrupt and has not been selfless as promised to alter the present rate of poverty. Unfortunately, the recent crisis has left a deluge of refugees with 20,000 in Cameroon, 3,500 in Nigeria with severe humanitarian consequences.

The discovery of oil has not altered positively the lives of the people. Oil proceeds have been grossly mismanaged and promises have not been fulfilled.

The failure of the World Bank backed Chad-Cameroon oil pipeline project valued at $3.7 billion to reduce poverty has helped the rebels to build the much-needed support. The worsening economic situation has enabled the rebels to get more sympathizers. The discovery of oil also provides a real opportunity for the rebels to wrestle control of government mainly to lay hand on oil-related revenue. Rebels are largely fighting for the control of oil revenue.

With the exception of China Oil Company that signed an exploration agreement worth $30million, Chad has not fared better in terms of direct foreign investments. The World Bank has recently frozen $100 million oil royalties after parliament in N'Djamena voted to amend Petroleum Revenue Management contrary to earlier agreement. Prior to 2005, foreign investment in the oil sector alone was put at 30%. This plummeted to 8.0% in the subsequent years. One possible explanation for this is that investors are wary of the prevailing situation in Chad. The ultimate victims, of course, are millions of Chadians.

It is quite possible that interference by France in the internal politics of Chad could be responsible for renewed hostilities. However, the actual cause of the crisis is attributed to the internal opposition to President Idriss Deby. With a new democratic constitution introduced in 1996 which produced Deby as president, he has in turn been caught up in an executive inertia. The constitution has been amended paving the way for him to be elected for the third term. Again he has positioned his son as his likely successor. Another election is due later this year. A rigged outcome would of course be what President Deby wants.

The events unfolding in Kenya and Chad are test cases for the African Union over its relevance in the 21st century. While the African Union does inform the whole world about its efforts or steps being taken to end crises in parts of the continent, most often such efforts have failed to cut ice. Condemning the likes of Deby and Kibaki would be tantamount to condemning many leaders who cherish longevity on the throne.

On a number of occasions, the AU continues to display its inability to proffer solution to crises within Africa. It continues to treat with kid-gloves those whose actions are responsible for crises. For instance, at the just concluded AU meeting, president Kibaki actions in Kenya were not condemned in absolute terms for the killings in Kenya. Instead, it was a wine-sipping moment.

It is crystal clear the crisis in Chad can only be resolved through constitutionalism, the rule of law and not through the battlefield. To make this happen, the whole process would have to be spearheaded by the African Union. It must take a pro-active role in resolving most of the crises on the continent. Failure to do so would portray African Union as a body that is always prepared to shirk one of its primary responsibilities- protecting ordinary African citizens from plunder.

Mr. Ayodele is the Executive Director of Initiative for Public Policy Analysis, a Lagos based think-tank. Edited by AfricanLiberty.org