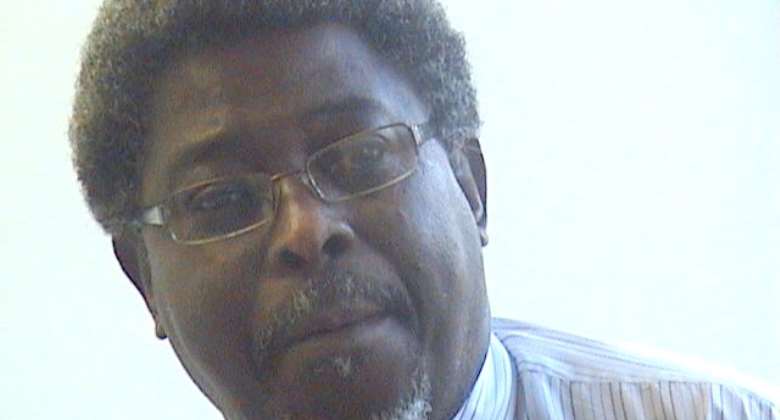 Several years ago, I met with President Kufour. It was a chance meeting; he was campaigning to be President of Ghana and had visited England. I was fortunate to have been invited to a Diwali festival that Tony Blair was attending and Mr Kufour had come along with a view of seeking audience with Blair who was then the prime minister.

I looked up and saw this bloke who looked familiar – I approached him and we had an engaging discussion for upwards of 30 minutes till he was called away. I liked his confidence – he was going to be president of my country so I wanted to know his views on a variety of issues and where Ghanaians stood with him.

I found time to attend all his town hall meetings in England and to ask him questions on what was going on in Ghana. On one occasion I asked why he had spent so much of his and countries time and money chasing the 'IFC' loan scam – he contended that it was no scam but we had made too much noise about it and they had to take advice to stop chasing it.

Another time he was basking in the glory of the MCA half a billion dollar grant and I asked whether this was seed money for the setting up of an American base in Ghana – he assured me then that there was no way that he was going to sell the country for a mess of pottage. He used the opportunity to tell me of all the developments that were happening in Ghana and that the next time I came home, I would marvel at the number of roads being constructed and would enjoy the benefits of a smooth ride to anywhere I wanted to go outside Accra. He as usual accused me of being an Nkrumaist propagandist and as usual I took his statement as a badge of honour.

The last time I visited Accra he had come to England as a guest of the Queen and I missed the opportunity of seeing him as I hoped I would at the Ghana Union dance in 2007. I would have told him that he was doing well with the roads, but that the coal tar on these roads were wearing very thin, especially the Achimota to Circle motorway.

But I would also have told him how proud I was of him in how he was fulfilling his objective to bring as much money as he could lay hands on for the development of Ghana. I would have done this even though he knows that I believe more in self reliance and that assisting people in Ghana to be production oriented as a way of firing up our development was better than the huge appetite for aid or grants that we had developed that may just render dependent entirely on foreigners and in danger of making us a subservient country instead of a developing country.

I would have asked him about his commitment to the cause of African Unity now that he had been made the president of the African union and commended him on his acceptance of the greatness again of Osagyefo Dr Kwame Nkrumah, the founder of our country and the vision he had for Africa.

So I find myself quite angry today for the way in which President Kufour has dishonoured the name of Osagyefo Dr Kwame Nkrumah in order to show his appreciation to President Bush.

Bush, like any other visiting president deserves to have been hailed in Ghana and Africa, the Americans have provided us with a lot of money and despite the fact that his hands are bloodied with the war of Iraq that I continue to maintain is a bad war, he deserves to strut his stuff around Africa to see for himself how all the money he and America have showered onto Africa is being spent.

I am happy Bush used Ghana to dispel the suspicion that some of us continue to hold that he intends for a military base in Ghana. I am happy that we may not have any military base in Ghana because if we do we will attract the terrorists that are creating havoc in the western world, justified or not. I do not think that it is something that we in Ghana should get involved in; it is and remains the Bush way and his legacy.

I am also happy that some of Millennium Challenge Account money will be used to upgrade our motorway that will make it easier for fresh produce and perishable goods to reach our ports in time for foreign markets, so that we can earn some little bit of more of foreign exchange.

I will be very happy if the standard of the motorway meets that high standard that Osagyefo Dr Kwame Nkrumah set in the construction of his motorway that 40 years on stands out as the best constructed and the most durable road in Ghana, better than all that has come after he has been overthrown and comparable to the M1 motorway in England that was constructed around the same time.

I will be happy if the contractors for this 14 kilometres stretch prove to all that we in Ghana still appreciate good things and are now able again to demonstrate to the world that when we are given free money we can use the money well. I will be happy if the procurement arrangements for this extension is properly undertaken to respect all the rules of tendering and transparency and that the government will not interfere in this arrangement after all the bids have been written

I am sure that in this case the Americans will not be happy if the Ghanaians try to award the contract to the Chinese and allow the Chinese to bring the labourers to come and deprive Ghanaians who need to be trained in the building sector of these jobs. I will not be happy if the attendant social problems of these Chinese fathering children who they will leave as the only benefit for the local population after the work is completed.

I however find myself very angry that in honouring Bush with the name of this proposed motorway, President Kufour dishonoured the greatest African leader who was declared African of the millennium. I am angry that after gloating all last year about his association with Osagyefo Dr Kwame Nkrumah and having their photograph pasted around all the country during the golden jubilee, President Kufour will show his true colours by dishonouring his name just to please a foreign president whose stature is nowhere near that of Osagyefo Dr Kwame Nkrumah.

I am angry that President Kufour will dare to rename a road in Ghana that is rightly called Kwame Nkrumah Motorway for President Bush!!!
Does he not realise that this is worse than selling the country for a mess of pottage? Does he think that even if he were to catch Osama bin Laden for President Bush, the name of George Washington highway in any American city will never be changed for to Kufour Avenue?
Does he not realise that this custom of honouring people outside our country with names of our roads must be done carefully?

I am very angry because our President's mentality has astounded me. What is it about Nkrumah's legacy that is threatening to Kufour?, I thought that he had come to relish the fact that his name is mentioned in the same breadth as Osagyefo Dr Kwame Nkrumah's. In the history of our country Nkrumah is the first president of and had he not fought and won our independence for us from our colonial masters, there would have been no Ghana for President Kufour to become the president of.

I am extremely angry with President Kufour for giving the impression that as Head of State he is not only content with continuing with what others have done, but he is intent on his own legacy and to achieve this legacy he has to dishonour the name of President Nkrumah.

Was is Shakespeare who said –
Who steals my purse steals trash; 'tis something, nothing;
'Twas mine, 'tis his, and has been slave to thousands;
But he that filches from me my good name
Robs me of that which not enriches him,
And makes me poor indeed.

I do not know how streets are named in Ghana now, but I remember that my late father who was a member of the Accra Municipal Council at the time of independence was involved in a committee that provided names for the streets in Accra, usually naming them after local heroes and events that have taken place in the local area. I also know that in later years some streets were changed from the names we inherited from our colonial masters to names of Ghanaians, and that this practice had continued to naming streets after African heroes and Presidents. There are many streets in Africa and Asian named after Nkrumah and rightly so. So I am sure that Kufour as President may name any street after anyone he chooses but to rob us of the name of the founder of our nation and replace it with an American president takes the biscuit.

That road from Mallam through Achimota interchange through Tetteh Quarshie Interchange to Tema must still remain by the name of our great leader – Kwame Nkrumah Motorway. You may think that you are rewarding President Bush by naming it after him but it will be a disgrace to the country if the African leaders for whom you want honour Bush as a friend of Africa find out that you sacrificed the name of the greatest champion of African Unity on the altar of the Bush shilling.

President Kufour, let it not be said of your legacy that in your enthusiasm to please those who gave you the money you needed to develop our country you sold us short by dismantling and dishonouring the legacy of those who came before you.

President Kufour, I ask you to think again on this one, you cannot make us the laughing stock of the whole world.

Ade Sawyerr is partner in Equinox Consulting, a management consultancy that provides consultancy, training and research that focuses on formulating strategies for black and ethnic minority, disadvantaged and socially excluded communities in Britain. He also comments on social, political and development issues. He can be contacted by email on [email protected] or through www.equinoxconsulting.net

He is an active member of [email protected]