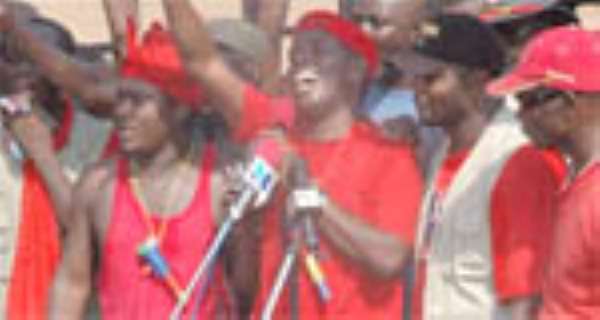 THE COMMITTEE For Joint Action (CJA), a pressure group, was yesterday ordered by an Accra Fast Track High Court to pay Gh¢600 to the Attorney-General (A-G), Ghana Broadcasting Corporation (GBC), TV3 Network and Metropolitan Television, for failing to appear in court after dragging them to court.

Mr. Justice Ofori Atta, who gave the order, also struck out the civil suit by the CJA against the respondents A-G, GBC, TV3 and Metro TV, to prevent the use of video footages of their “wahala” demonstrations by the TV stations to promote the newly introduced talk tax on mobile phone users for want of prosecution.

The matter was called earlier but had to be stood down as neither members of the CJA nor their counsel, Mahama Ayariga, were in court.

When the case was called again, Mr. Anthony Mathews, counsel for GBC, prayed the court to strike out the matter, which the Judge upheld.

The applicant, CJA, wants a declaration that the use of video footages of their “wahala” demonstrations for certain advertisements by the respondents, violated their rights and subsequently wants a prohibitive order preventing them from continuing with the video footages.

In their affidavit in support of the motion for a declaration and order of prohibition by Samuel Okudzeto Ablakwa, spokesperson for the group, it stated that the applicant had organised series of demonstrations in various regional capitals in Ghana.

According to Mr. Ablakwa, the demonstrations were against government policies and in protest against certain hardships occasioned to a majority of Ghanaians due to taxes imposed by the government.

It stated that the respondents were using video footages of its demonstrations to advertise for the imposition of the tax on talking on mobile phones which it is avowedly against, adding that the said advertisement made false and misleading statements regarding the employment status of the demonstrators.

Furthermore, it noted that it had called on the respondents to desist from using images of its members but the respondents have publicly indicated their refusal to do so and have challenged the group to go to court.

In addition, it stated that its image was being abused, and explained that they had a right not to have their images with messages that were false and misleading and which they did not agree with.

The pressure group therefore wanted the court to declare that its rights had been violated by the use of their video footage to advocate a fiscal policy that it disagreed with, and that the inscriptions accompanying the images used were false.

The CJA also wanted a declaration that the economic policy of taxing to create jobs being advocated by the advertisement was misleadingly imputed to the position of the group.

The plaintiff wanted the court to restrain the respondents from further using images of its members in the said advertisement as irreparable damage would be occasioned to the reputation of the CJA if the restraining order was not granted.