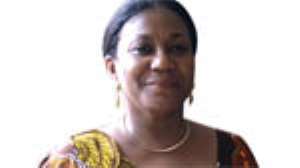 SHE IS A FINE and gracious fair-looking lady who is exceedingly appealing in appearance as well, and has reaffirmed her unflinching support and love for her husband, Nana Addo Dankwa Akufo-Addo, the presidential candidate of the New Patriotic Party (NPP).

Rebecca Akufo-Addo, a potential next First Lady for Ghana has stated that she has an unshaken belief that her husband would win the next election and would become one of the best presidents in the country's history.

In a strategic move to make this belief a reality, she has started rallying for her darling husband, the support of her womenfolk.

As part of this support-gathering move, the flagbearer's wife yesterday hosted the women in her party to an 'off-media' interaction over lunch at the Nima residence of her late father-in-law.

It was attended by the wives of the other NPP presidential aspirants who competed for the coveted position at the party's congress at the University of Ghana, Legon last December.

Also in attendance were female Members of Parliament on the ticket of the NPP, female ministers of state, national, regional and constituency women organizers, and many other women of influence in the party.

The afternoon interaction was, among other things, to strengthen the bond of friendship among the women leadership of the party and galvanize their energy into positive support base for the party.

It also served as an opportunity for them to socialize among themselves and re-energize themselves for this year's electoral duel. The invited guests were also entertained to loud music as some of them besieged the dance floor to display their dancing skills while the rest moved about in their seats.

Speaking to DAILY GUIDE, Mrs. Becky Akufo-Addo, daughter of Third Republic's Speaker of Parliament, Griffiths Randolph said she has no doubt in her mind that for the past seven years, the NPP-led government has done a lot of good things for Ghana and 'when' her husband takes office next year, he would build on the solid foundation that has been laid.

“I believe in my husband that he can do well for the country, and would have the interest of the women at heart when he becomes president. And I believe by God's grace he would win the race. As a woman, I know how we feel on certain issues and I can tell you for certain that my husband cares for women. He has a strong belief in the potential of the women of this country and would be ever ready to help us reach greater heights.”

When asked if she was already savoring the feelings of being a First Lady, Mrs. Akufo-Addo, flanked on both sides by the wives of the men who competed with her husband but lost, smiled and said that was far from the truth.

“I love my husband and would do everything to support him but until he wins, I am not yet the First Lady. But I feel very happy to host all these senior women of influence in our party. They have demonstrated a lot of love, and pledged their support to work with us as a team to ensure that Nana wins the election for the NPP and not just for himself or for me,” she added.

Mrs Rebecca Akufo-Addo denied the assertion that the feast was an undertone and that the reason for the gathering was more of a move to unite and 'heal the hearts' of the wives of the aspirants who lost to her husband.

“I believe the party is not divided, so in the first place we need to understand that we are united. Then I also believe the congress ended a long time ago and people have since then come over the pain of losing an election. Even before this gathering, all the people you see here have in various ways demonstrated their support for my husband's candidature. Some have done it openly and some have not made it known but we are all championing a common agenda and that is to ensure that an NPP government hands over to an NPP government and by the grace of God, I believe in all humility that my husband would win the race.

“I appreciate the support from everyone, especially the women and I believe our efforts would be crowned with success by the grace of God,” she stated.

Rebecca Akufo–Addo spoke with such charming courtesy and the warm affection of a mother that one could not help but admire her and envy what exceptional treatment was being given to the man who lies by her side at night.