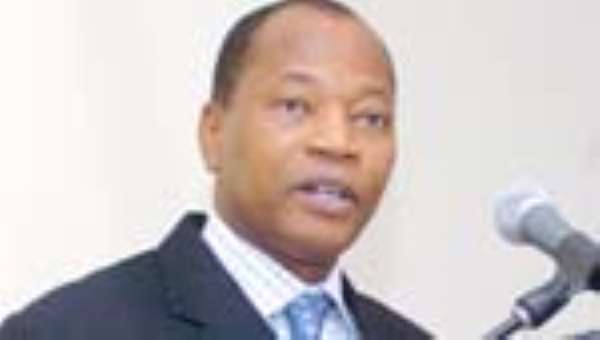 Dr. Mohammed Ibn Chambas was on Friday sworn into office as the first President of the ECOWAS Commission, marking the completion of the process of transformation of the West African sub-regional body from Executive Secretariat to a Commission.

With the right hand raised, he pledged confidentiality, loyal service and not to accept or receive instructions from any Government external to the ECOWAS Community.

This was at the 32nd Summit of the Authority of Heads of State and Government in the Nigerian Capital, Abuja.

President John Agyekum Kufuor was among leaders who attended the one-day meeting.

Dr. Chambas whose appointment officially took effect from January 1, 2007 and would hold office for a four-year term appealed to the Heads of State to act decisively to reduce to the barest minimum all outstanding non-tariff barriers and bottlenecks to free movement of persons and goods within their respective national jurisdiction.

He identified effective implementation of the regional Protocol on Free Movement of Persons, Right of Residence and Establishment and that of Trade Liberalisation as major challenges facing the ECOWAS.

"In spite of vigorous efforts by the Commission to ensure hitch-free movement of persons and goods within the Community, compliance remains frustrated by numerous roadblocks along regional highways and extortion by officials mostly at border posts."

Dr. Ibn Chambas said the Commission has therefore launched a new initiative to provide incentives among border officials to promote compliance and that pilot monitoring units to monitor compliance and promote best practices were being established at the Benin, Burkina Faso, Ghana, Guinea, Mali, Nigeria and Togo borders.

Additionally, complementary measures like the construction of joint border posts to expedite immigration formalities and clearing of goods, the creation of observatories along state corridors to detect malpractices and awareness campaigns to educate all stakeholders in the road sector and fight HIV-AIDS would be pursued.

"We have a shared vision that by 2020, ECOWAS shall have moved from an ECOWAS of States to an ECOWAS of people", he added.

President Kufuor hailed the security situation in the sub-region, saying the relative stability was a mark of progress, an indication that, efforts at finding lasting solutions to the conflicts, which bedeviled the sub-region were bearing fruits.

He said there was genuine optimism for peace in the sub-region and asked his colleague Heads of State, to ensure that the expectations of the future of the Continent were realised.

President Kufuor said there should not be any doubt that transparent, credible, inclusive and violent free elections were critical to the establishment of democracy, peace, sustainable development, regional integration and human security.

"We must therefore uphold within our individual states and throughout the region the Mechanism and Supplementary Protocol on Democracy and Good Governance as outlined by our Community." President Kufuor, who is the Chairman of the African Union (AU) said adherence to agreed protocols would make the Community a better building block in the quest for the Continental Union.

He also spoke of the need for co-operation in the form of Customs Union, Power Pools, Joint Infrastructural Development Projects, deployment of Information, Communication Technology (ICT) to overcome cultural and linguistic barriers and engender shared values to serve the purposes of the ECOWAS Strategic Vision Framework Nigerian Leader Umaru Musa Yar'Adua promised firm commitment of his country to the goals of the sub-regional body and used the occasion to appeal to parties to the Cote d' Ivoire conflict to respect the signed peace agreement and timetable for democratic elections.

In a welcoming address, ECOWAS Chairman, Blaise Campaore of Burkina Faso, on behalf of the Community, congratulated President Yar'Adua on his election.