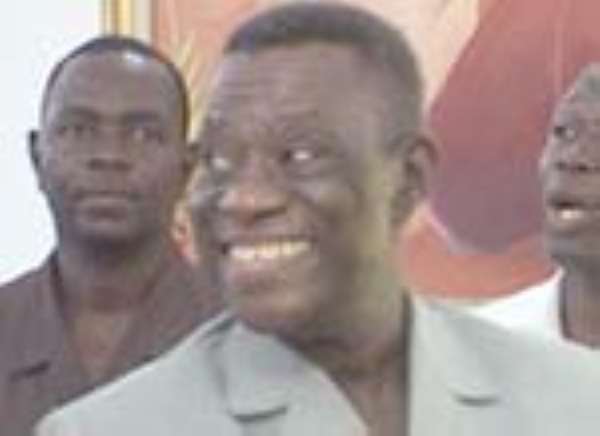 Professor John Evans Atta Mills, National Democratic Congress (NDC) flagbearer, and Nana Akufo-Addo, one of the New Patriotic Party (NPP) presidential hopefuls, failed to show up for a debate on the issue of a United States of Africa.

While the Foreign Affairs Minister was said to be tied down by a cabinet committee meeting, the former vice president's failure to show up for the debate seemed intentional.

Interestingly, the two legal brains were billed as principal speakers of the programme that would chart the course for a new Africa.

A last minute text message sent to the organizers stated that the NDC flagbearer had opted out of the programme because of the involvement of the Centre for Democratic Development (CDD).

The message, which was sent by a reliable inside source, read: “Prof. is unable to make it because of official position on CDD”.
Incidentally, other NDC kingpins like Benjamin Kumbuor and Dr. Tony Aidoo were at the programme- a development which defeated the reason given for Mill's absence.

But the situation notwithstanding, all other invited speakers and discussants personally turned up and made very interesting inputs in the debate, which ended up with sharp disagreements on opinion, but eventually setting the agenda for a people-driven African Union.

There was a split opinion on whether the process needed to be speeded up or done gradually.

Professor K. Boafo Arthur of the Centre for Democratic Development (CDD) opined that the proponents of the idea needed to “hasten with caution”.

He said even though the idea was a good one in the current global environment, there was the need for clear signposts in terms of objectives, obligations and commitments.

The Attorney-General and Minister of Justice, Mr. Joe Ghartey expressed his total commitment to the notion but called for what he referred to as 'clearer directives'.

Sounding very tactful, the minister said the debate needed to be guided by the aspirations of the entire African people.

“The debate demands an all-hands-on-deck approach, and should not be treated as the prerogative of African leaders and their governments.

This is the moment, and the continent needs to make use of it,” he observed.

On his part, Dr. Yao Graham, Executive Director of Third World Network, said the issue of whether to go fast or gradual was neither here nor there.

According to him, the critical challenge facing the continent was how to disengage her from the shackles of the complex grips of sub-regional blocks.

He said the way forward had become more complex due to the fact that the Americans, Europeans and Chinese each claimed to have different agenda as to how to relate and trade with Africa.

“One of the demands Africans should make is a critical shift of approach, possibly through a referendum, so as to bring the people to the centre,” he noted.

Mr. Kwesi Pratt of the Socialist Forum said the gradualists' approach was senseless because similar excuses had been given since time immemorial.

According to him, those who had wanted to slow down the abolition of the slave trade in the USA had proposed the gradualists' approach, adding that if the abolitionists had listened to them slavery would still have been hanging around.

Other notable speakers at the function included Ken Ofori-Attah, Benjamin Kumbuor, Akoto Ampaw, and Prof. Ama Atta Aidoo.
The theme of the public forum was: Achieving United Nations of Africa By 2025.