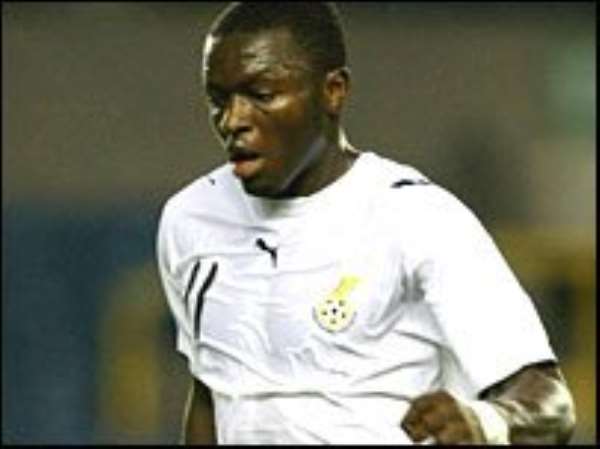 Muntari rifled a 30-yard shot into the top corner after the Black Stars hit the post three times in the first half.

Asamoah Gyan put Ghana into the lead after 54 minutes with a penalty following a foul from Oumar Kalabane.

Kalabane made amends with a headed equaliser for Guinea, before Muntari saved Ghana with his late winner.

The weight of delivering the hopes of a nation seemed to burden Ghana, who started the match in scrappy fashion.

Asamoah Gyan had the best early chance, having been played in by Muntari on six minutes before shooting wide from 15 yards.

Gyan then found himself with another opportunity within 20 seconds thanks to a poor goal-kick from Guinea goalkeeper Kemoko Camara.

The Black Stars started to settle but as the Accra crowd warmed to their sides' chances, Guinea showed they too could be dangerous with Oumar Kalabane heading over from a corner.

New-boy Quincey Owusu-Abeyie was a growing threat for Ghana, providing tricks and crosses from the left wing, as the powerful Ghanaian midfield of Michael Essien and Muntari started to pull the strings.

And it was from Owusu-Abeyie's cross that Junior Agogo smashed a header against the post on 20 minutes to crank up the pressure on the Sylli Nationale.

Despite their lack of possession Guinea still broke with purpose to worry a pensive looking Ghana defence.

But it was Essien who had the whole stadium on their feet again, when he hit the post again from a Laryea Kingston left-wing corner.

As the game approached half-time the 33 degree heat, not to mention the long grass, slowed the passing.

But Muntari then fired a half-volley thunderbolt against the upright, Ghana's third close miss of the half, after connecting with a cross from Kingston.

French coach Claude LeRoy must have said a few choice words at half-time because his Ghana side restarted with increased purpose, throwing balls forward looking the head of Gyan.

Another long-ball to the head of Gyan played in Junior Agogo who was scythed down by Kalabane as he sprinted into the box to earn the Black Stars a penalty.

Udinese's Gyan shrugged off any nerves to slam the ball into the roof of the net, sending the home crowd into riotous celebration.

Guinea coach Robert Nouzaret changed to a more attacking formation and his side rallied by creating a number of openings, to the worry of a Ghanaian defence led by an on-form Eric Addo.

The pressure paid off when Oumar Kallabane rose above two Black Star defenders to thump home a header in off the crossbar from a Pascal Feindouno corner.

The initiative was now with Guinea, as Ghana once again looked under pressure and in need of their big names players, especially Essien, to wrest back control.

The Black Stars were being limited to long-range efforts before Andre 'Dede' Ayew, the son of Ghana legend Abedi 'Pele' Ayew, replaced Owusu-Abeyie.

Muntari then went close with a long-range drive - in what was becoming an open, end-to-end game.

Then with the game petering out Muntari unleashed his left-foot bullet from midway in the Guinea half to resurrect the party planned by the home fans in Accra.