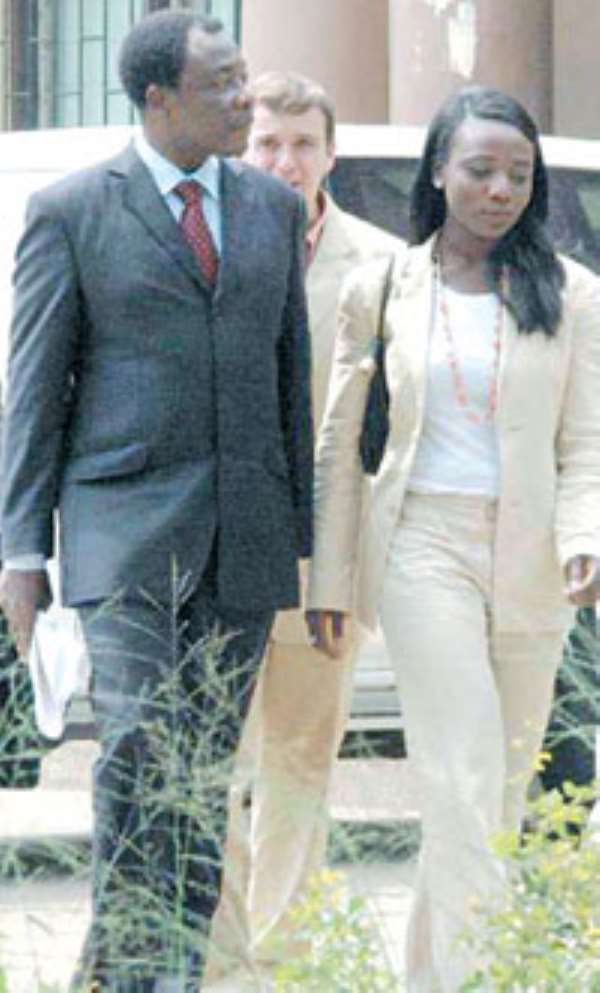 Mary Poku, a Legal Practitioner and the first daughter of the former Minister of National Security, Francis Poku, fumes with rage over the allegations that his father owns lots of lands in the country including a house at Trasaco valleys.

She said it was a surprise that properties acquired with her hard earned income could be used to damage her father's reputation.
“I dare anyone to come forward and prove that my dad owns a building at Trasaco Valley. The only building there belongs to me and I'm a successful Lawyer in London,” she cried.

Mary, 37, who was speaking to the Chronicle in reaction to the report the Chronicle carried on its Monday's edition citing allegations of massive acquisition of wealth as one of the reasons for Mr. Poku's dismissal, said: “I challenge anybody at all to boldly come and point to the nation, the number of houses that my father own. I own that property. I bought it with my money and I can tell you with confidence that if anybody can prove beyond that, then I can say it is an ill-gotten property.”

Mary Poku who said she was called to the Bar of England and Wales in 1993 and received a gross annual income of approximately _90,000 (ninety thousand pounds starling), urged “busybodies to stop peddling falsehood about her dad.”

“I am reliably informed that the acquisition of property never came up at the meeting with the President and there was nothing about dishonesty,” she added.

Francis Poku's daughter, who practices Law at the Chambers of Lord Carlile QC, told the Chronicle that it was never true dishonesty charges were brought against her father during the meeting he had with the president.

According to her what transpired at the meeting bordered on competence, and not dishonesty.

She said she was grateful that the allegation that her father owned several buildings at Trasaco Valley came up in the media and The Chronicle has given her the opportunity to clarify matters to nib at the bud the allegation which lingered on for so long.

“It is good you brought out this story because it has given me the opportunity to respond to it, this allegation has been lingering on for years, the matter had been investigated before and my dad was found innocent,” she reported.

“He who alleges must prove but I can tell the whole world that my father has not illegally acquired any property. I acquired this property at $320,000 in 2001. I want to assure the whole nation that our family will accept the full responsibility if, indeed, there is a need for that. The crux of the matter is that the story is not true. It is a mischief against my father,” she reiterated.

Mary Poku, who intimated that she is married to a University Lecturer at the University of London and a graduate from Oxford University, could not comprehend the motive behind the story.

She emphasized that her father would not make any comment on the issues relating to his dismissal since as she put it “The President has the right to appoint and to dismiss.”

She concluded that she acquired her first magnificent building in Kenton City in London an area that is considered the richest area in London.
Investigations conducted by The Chronicle on the occupation of Ms Opoku revealed that she is a Lawyer currently with the 9-12 Bell Yard - a leading set of barristers, whose Chambers specialize in criminal law.Alex Carlile, the Head of Chambers, is a former UK MP who advises on Civil and Criminal Law in the aspects of commercial fraud and the process of legislation and parliamentary standards in the United Kingdom.