Condom Distribution Not The Way Out – Says GVA 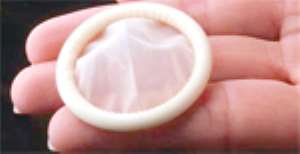 A MOVE adopted by the Ghana AIDS Commission as a strategy to prevent the further spread of the HIV disease during the CAN 2008 Tournament has been condemned by members of a faith-based voluntary youth anti-HIV and AIDS advocacy organisation, Great Vision Africa, (GVA).

The Commission recently announced that, it would release as many as five million condoms to hoteliers to be given freely to their respective clients during the African Cup of Nations Tournament, scheduled to commence next week. The move, according to the Commission, is an approach to avert further spread of the disease.

However, King Trinity Senyely Akpadie, Chief Executive Officer of the NGO told HEALTH MATTERS in an interview that the move is not the best way out in preventing the further spread of the virus.

He said the way forward was to make the public aware of the dangers associated with the disease through the free distribution of leaflets and brochures, as well as preaching the message of total abstinence and faithfulness.

Condom use, according to him, is not the surest way of protecting people from getting infected with the disease, explaining that testimonies given by some people living with the virus indicate that though they consistently used condoms as means of protecting themselves against HIV, they still contracted it.

He said recent studies indicate that even people who correctly and consistently use condoms still stand the chance of getting infected with the killer disease.

“Let me sound this word of caution that the announcement by the Ghana AIDS Commission to freely distribute condoms during this crucial time will rather result in new infections of HIV because the attention of unaware HIV-infected people who cannot afford the cost of condom has been drawn, and they would certainly go for them at no cost, thereby, spreading the virus to innocent people.

I will emphasise that condom use is not 100 percent protective.
“Besides, it is a guaranteed fact that people who lack knowledge about the proper use of the condom will definitely contract the virus,” King Akpadie reaffirmed.

He also said, “Great Vision Africa strongly believes that the only pragmatic and surest way to fighting a successful battle against the spread of the HIV and AIDS canker is to constructively explore and harness the long-lasting values and virtues hidden in the approach of Abstinence and Faithfulness, as well as teaching all who are susceptible to the pandemic, especially the youth of Africa and the world at large.”

The GVA CEO also expressed deep concern about the absence of proper monitoring facility to check the total number of wrongly-used condoms; a trend, he said, that is not the best for a country committed to fighting the deadly disease.

The daily spread of the disease in Ghana today, he said, has increased from 200 to 220 people.

King Akpadie further pointed out that the United States of America, a country whose HIV prevalence rate is lower than that of Ghana, is preaching abstinence rather than the focus on condom use.

He consequently showed a copy of America's Public Policy on HIV and AIDS to HEALTH MATTERS, portions of which state that:

“Efficacy of Abstinence – An only programme for HIV prevention among young people. Over the last five years, the US government has significantly increased its support here and abroad for Abstinence-Until-Marriage programmes aimed at preventing pregnancy as well as HIV and other Sexually Transmitted Diseases among young people.”

He called on those who do not yet know their HIV status, to go for Voluntary Counselling and Testing (VCT), and emphasised the need for people to remain faithful to their partners.