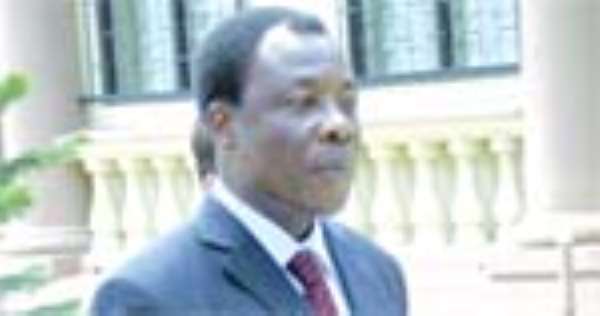 THE NATIONAL Security Minister, Francis Poku has been removed from office with immediate effect, on the orders of President John Agyekum Kufuor.

A terse statement issued from the Office of the President at the Castle on Saturday stated without further explanation, “His Excellency the President has relieved the Hon Minister of National Security, Mr. Francis Poku of his duties with effect from today, January 12, 2008”.

The statement was signed by Ambassador D.K. Osei, Secretary to the President.

DAILY GUIDE learnt that the President has fully assumed responsibility for national security.

No reason was assigned for the sudden removal of the security capo, who is known to be very quiet, unassuming and soft-spoken.
Further comments could not be extracted from either the Blue Gate office of the minister or the Osu Castle.

The President expressed his gratitude to Mr Poku for his immense contribution to the stability and development of the country within the last seven years in the two capacities he had served the government.

The President further wished the ex-security chief well in all his future endeavours.

The Saturday mid-morning announcement caught political commentators off guard as nobody had a hint of the development.
DAILY GUIDE learnt that there would be more surprises in the last lap of the Kufuor Administration.

President Kufuor, who will be answering a barrage of questions at the annual People's Assembly tomorrow is said to be determined to tighten his government and take absolute control of all areas.

Dr. Kwesi Anin of the Kofi Annan Peace Centre in Accra, in a comment, said although the removal of the minister was shocking, he believed the security system was well placed to withstand the shock.

He is a proud recipient of the Order of the Star of Volta.
Poku sought refuge in exile following J.J. Rawlings' coup of December 31, 1981.

He was touted as one of the officers of the Bureau of National Investigations (BNI) who tried to ward off the potential danger that Rawlings posed.

Between 1963 and 1967, Mr Poku studied French at the University of Ghana, Legon, where he obtained his Bachelor of Arts degree.

The dismissal of the security chief, sources said, may be the prelude to an impending ministerial reshuffle, which would see the possible return of former Transportation Minister, Dr Richard Anane to the same ministry.

Since Dr Anane stepped down over a year ago, no substantive minister had been appointed for the Transportation Ministry.

The Energy Ministry, which has not been with a substantive minister since Joseph Kofi Adda was asked to proceed on leave three months ago, is also crying for a replacement. The Ministry is being run by the deputy Minister, Kwame Amporfo-Twumasi, MP for Nkoranza South.

More DCEs have also been penciled down for dismissal, DAILY GUIDE has gathered.