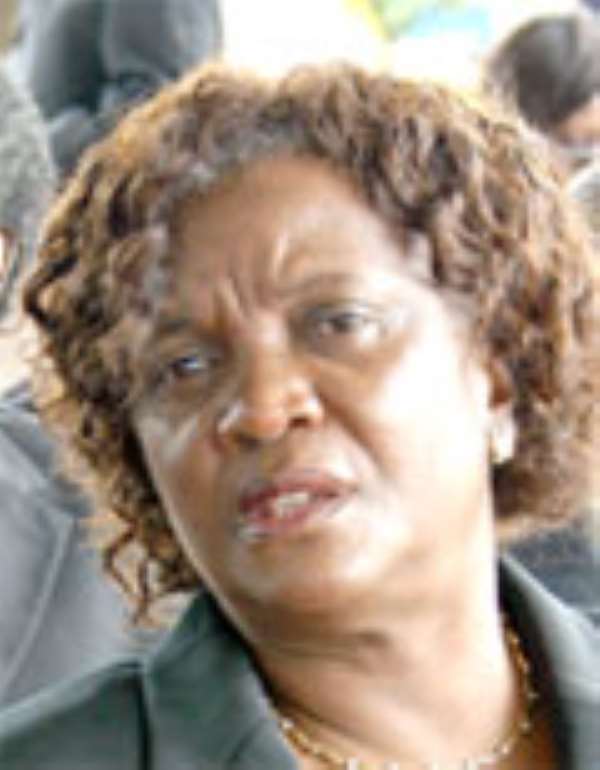 The Chief Justice's visit was necessitated by a report carried by Metro Television last week describing the building as a death trap after numerous reports filed by The Chronicle and other private newspapers in the Central Region had fallen on deaf ears.

She inspected the court complex, which consists of Four High Courts, a regional tribunal, a magistrate court and two circuit courts.

All the courts had developed serious cracks with weak ceiling which leaked badly when it rains. Justice Beresford Acquah, a judge in one of the circuit courts revealed that he was compelled to abandon his court for three days after continuous rainfall which made the court inhabitable for proceedings.

Mrs. Woode was marveled at the condition of the ceiling fans and seats as well as table and chairs in the court rooms. At certain point Mrs.

Woode inquired from Beresford Acquah whether he felt comfortable in administering justice in Circuit Court 1 where the weakness of the building as well as bad nature of the seats were glare. The bad conditions perhaps might have been caused by the sea breeze with its saline rusting the ceiling fans and iron rods that were used to construct the building.

In addition, Mrs. Woode was so terrified with the bad condition prevailing at Magistrate Court that she asked His Lordship, Eugene Obeng-Ntim how he felt working in that deplorable state but he smiled in response to the question posed to him.

She also visited chambers of some judges which were nothing to write home about.

An Appeal Judge Court in charge of Central Region, Justice Marfo Sau in his interaction with the press stated that current state of the 33 year-old Court was not due to lack of maintenance as was being peddled by some individuals but rather due to the location of the building which was very close to the Atlantic Ocean.

Justice Sau who spoke on behalf of the Chief Justice who declined to speak to the press, disclosed that temporal rehabilitation of the courts would soon take place to restore the building.

In view of that, the court would soon be moved to the Cape Coast Metropolitan Assembly (CCMA) and the Central Region House of Chiefs premises to pave the way for rehabilitation of the Complex.

He said after consultation with the Central Regional Minister Nana Ato Arthur it was agreed that CCMA and House of Chiefs premises would be used as court very soon.

The CJ and his entourage were conducted round by the Central Regional Administrator of Judicial Service, Charles Kwesi Baidoo. They visited House of Chiefs, CCMA and Elmina District Court where the CJ expressed satisfaction about the better conditions there.

The trip also took them to Fourth Ridge in Cape Coast where about four acres of land had been acquired for the construction of a new court complex.

Architectural design for the construction of the new court had been completed awaiting funds for actual construction to start.

A representative of the Architectural and Engineering Service Limited (AESL), Mr. Joseph Afful told The Chronicle after inspection of the Court Complex that it would be very easy for the AESL to renovate the building.