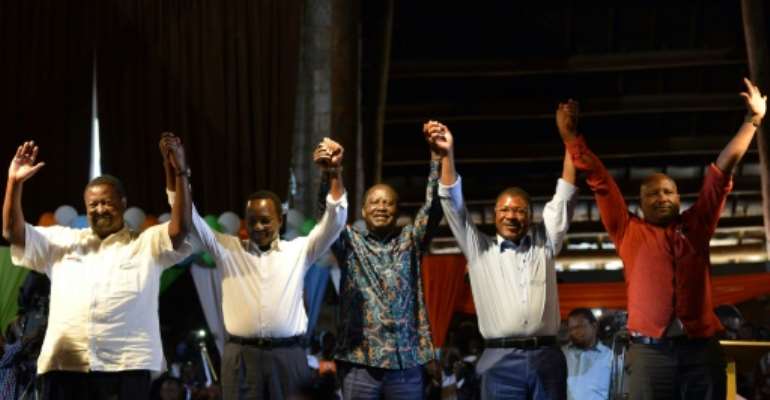 A schoolgirl runs past a burning barricade in Nairobi on May 23, 2016. By Carl de Souza (AFP/File)

The country's five main opposition parties said they intend to field a single candidate in the presidential vote under the National Super Alliance (NASA), formed at a gathering attended by thousands of supporters in the Kenyan capital.

"We are committed to a joint platform for the forthcoming general elections as a united opposition against the Jubilee administration," read a statement signed by the opposition leaders.

If the alliance makes it through the tricky next step of jockeying to choose its flag-bearer, it could pose a serious threat to Kenyatta's bid for re-election.

One of the main contenders will be opposition heavyweight and former premier Raila Odinga, 72, who lost out on the top job in 2007 and 2013, both times accusing his opponent of rigging the election.

Fears are high of a replay of 2007 when the widespread belief among the opposition that incumbent president Mwai Kibaki stole the vote sparked violence that quickly split along tribal lines and left more than 1,100 dead.

While long seen as an oasis of stability, politics in Kenya is strictly divided along tribal lines and the impression of a winner-takes-all system has created deep and dangerous divisions.

The spectre of fraud this time around has already sparked tension ahead of the August 8 vote.

Many had feared the opposition meeting would result in a call for massive protests against an election law which the ruling party rushed through parliament over Christmas to allow manual vote counting if an electronic system fails.

The furious opposition sees this as a bid to rig the election, while the ruling party insists a back-up system is essential.

Odinga said the opposition leaders had decided instead to focus on getting millions of unregistered voters to sign up in a final drive starting next week.

"We will deal with election laws ... but you must all go out ... and not rest until everybody you meet is a registered voter," Odinga told the gathering.

Election officials have in the past been accused of not doing enough to register voters in opposition strongholds.

Authorities are also in the process of vetting new members of the election commission, which stepped down en masse after deadly opposition-led protests in May and June against the body -- seen as biased towards Kenyatta.

Kenyatta has overseen strong economic growth -- expected to hit six percent in 2017 -- but the country continues to be strangled by massive corruption, with regular scandals involving eye-watering sums of money hitting the headlines.

Youth unemployment is among the highest in East Africa, cost of living has only increased and the country has also faced serious security challenges with a string of attacks by the Al-Qaeda linked Al-Shabaab group.