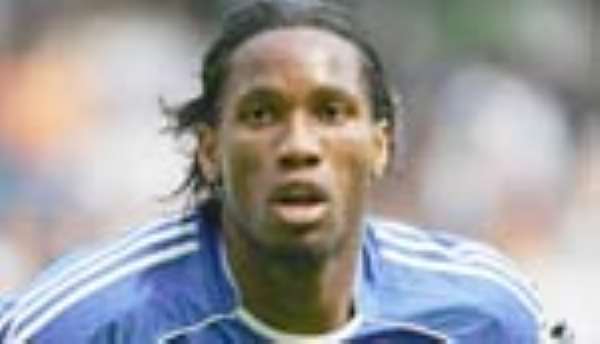 In spite of fears that Chelsea striker Didier Drogba may not be fit enough to feature for his country in the upcoming MTN African Cup of Nations in Ghana, he has been included in the 30-man preliminary squad of Ivory Coast for the tournament.

Readers would recall that the whole of Nigeria was thrown into a state of jubilation when news broke that the striker would not be fit enough to feature for his country in the Ghana CAN 2008.

Excitement of the Nigerian fans over the Chelsea star's possible absence from the tournament stems from the fact that though Cote d'Ivoire has a compact team with talented players such as Didier Zokora, Kolo Toure, Arouna Kone, and Salomon Kalou, it is widely held that the team is not the same without inspirational Drogba.

Soccer connoisseurs have termed Group B, which comprises Nigeria, Cote' d'Ivoire, Mali and Benin as 'the group of death', and on January 21, 2008, the Elephants will play the Super Eagles in the group's opening game in Sekondi.

Now that the African Best Footballer has been named in the Ivory Coast squad, soccer pundits are predicting that the West African country could lift the trophy come February 10, 2008.

“But winning the trophy depends on Drogba's fitness since the team revolves around him,” an expert quipped.

Even if he is not fit for the tournament, it is likely he will be forced by FIFA to remain on the sidelines until the end of the tournament, as Michael Essien was in 2006.