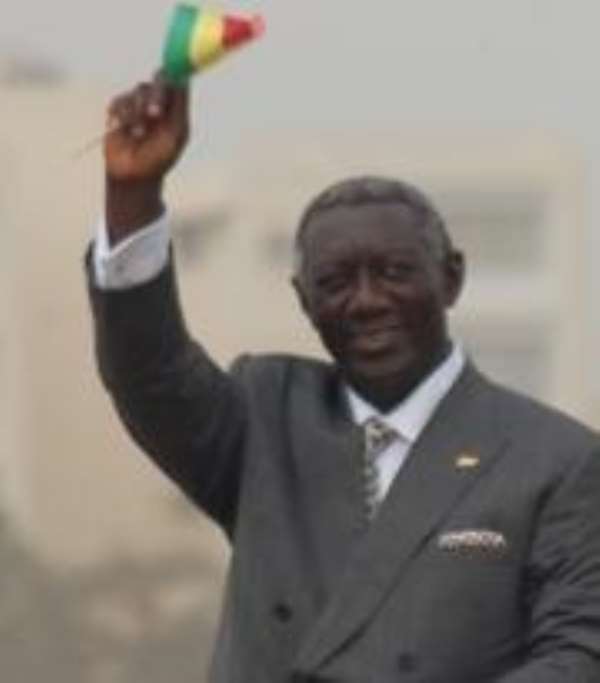 
President John Agyekum Kufuor this morning, Christmas day, December 25, 2007 was on Joy FM's Super Morning Show, and he wished all Ghanaians good will and a peaceful Christmas.

The President spoke on phone.

In the studio to interview the President with sit-in host, Israel Laryea were four children who were randomly chosen. They are Jojo Ocran, 12, Tobi Welson 9, Comfort Sena 12, Priscila Quansah 12, and Master Amoakohene 9.

The children asked the President questions ranging from how he celebrated Christmas as a child to whether he thinks Ghana could become as rich as the United States of America.

To a question on how he felt after his car accident on November 14, 2007, President Kufuor said he is very thankful to God that he survived. He said the impact of the accident on his car could have been fatal, but he believes that it was God who saved him, his aide camp and driver.

The president said as a child, he always looked forward to Christmas because that was when he, as a child and other children looked forward to enjoying various types of meals, getting new clothes and sharing in the happiness of families and friends. The president also recalled that Christmas was the period when young men dressed in fancy clothes and went around playing brass band music. He said he enjoyed those times very much.

Asked how he felt being the president of Ghana, he said even though, it is a special feeling, it comes with great responsibilities towards the people of Ghana. The President said to be chosen by the country's 20 million or so population to be its leader is a blessing, but then it places on him a great sense of responsibility towards the same people.

He said, sometimes he thinks so much about the country to the point of losing sleep. He said he is always thinking about the wellbeing of Ghanaians, how to create employment for the teeming youth of the country, provide good education and health care for the people.

President Kufuor, said, Ghana is so heavily endowed with natural resources, and he believes that with good governance, responsible citizenship and hard work the country could do well and prosper. He said the US with all its science and technology would envy Ghana.

He said Ghanaians are a peaceful people who have been living together for a long time. He asked that Ghanaians continue to live at peace with one another.

He said his heart goes to all the handicapped, orphans, widows and needy people and urges all those who have something to eat, to share with the less privileged.

In his closing remarks, President Kufuor wished all Ghanaians peaceful elections in the year 2008.

MP drags Ursula to parliament over poor cellular network in ...
58 minutes ago

Akufo-Addo’s Family And Friends Agyapa Kabuki Dance With The...
1 hour ago