'Let's leave this congress more united than before' - President Kufuor 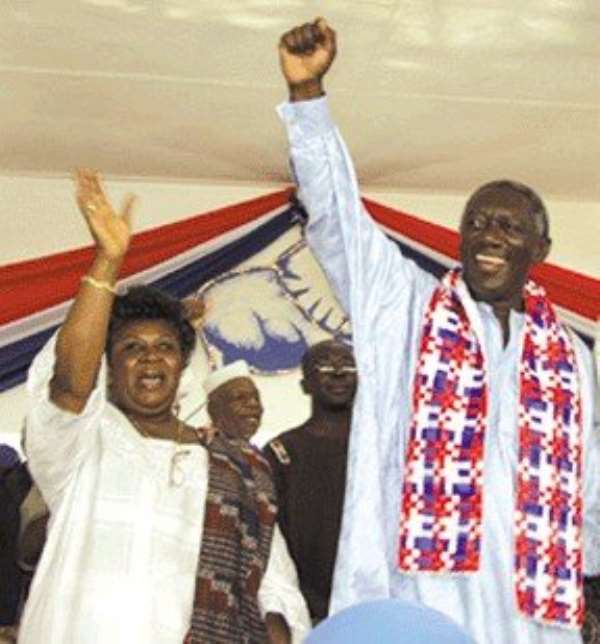 President John Agyekum Kufuor on Saturday reminded those contesting to replace him of New Patriotic Party's (NPP) tradition of remaining united after vigorous internal competition and urged them to ensure that after the congress.

"No matter what happens, let's leave this congress more united than before - let's be reminded that a house divided against itself cannot stand," he said at the Extraordinary National Congress to elect the Party's Flagbearer for Election 2008.

In all, 17 aspirants are vying for the presidential slot of the Party at a congress, which had been described as unique on the grounds that it was the first that would elect a Flagbearer to replace a sitting president.

The congress is on the theme: "Uniting for Victory." President Kufuor recalled that in 1996 and later in 1998 when he was elected Flagbearer of the party after "vigorous internal competition", the losing aspirants and the rest of the party rallied around him for Election 1996 and Election 2000.

"I was lucky to have enjoyed the support of all the losing aspirants when I won in 1996 and 1998...I will, therefore, support anyone of the 17 aspirants who emerge as Flagbearer of our party after this congress," he said adding the congress marked the beginning of the end of his tenure as Flagbearer and Leader of the Party.

"This congress is an indication to me that this is the beginning of the end of my tenure as Flagbearer of the NPP", President Kufuor told the 2,326 delegates.

President Kufuor admonished the 17 aspirants that whatever the outcome of the congress may be, they should take solace in the fact that each of their names would go down in the annals of the history of the Party as strong and committed leaders of the Party.

He noted that the separate interventions by each of the aspirants through their innovative, professional and clean campaigns in the run up to the congress had strengthened the Party's structures across the country.

President Kufuor called on the aspirants to continue with their heavy financial investment and organisational skills in support of the Party's 2008 presidential bid after the congress.

He urged delegates to let their thoughts transcend all parochial considerations and vote for a candidate that would build on the achievement of the sitting government.

"Look beyond your parochial interest and consider the national interest when you vote to elect our new Flagbearer and do not fail the Party and the nation," he said.

President Kufuor said his government was mindful that the Party's fortunes in Election 2008 would depend largely on the performance of his government and that was why the Government had worked hard to provide safety nets for Ghanaians over that past seven years.

He mentioned the Capitation Grant for schools; National Health Insurance Scheme (NHIS); National Youth Employment Programme; free bus ride for school children; the reopened Accra-Tema rail track and the commencement of the Bui Dam Project among other things as landmark achievements of the Government.

"With the discovery of three billion barrels of oil and the success of the West African Gas Pipeline Project under my government, we have a solid record to go to elections in 2008 and win - let us not do anything at this congress to jeopardize our chances," he said.

President Kufuor also apologised to the rank and file of the party saying that every mistake he committed during the period of his stewardship was not deliberate and without any malice.

"I would like to apologise for any act of commission and omission during the period of my stewardship," he said.

Mr Peter Mac Manu, National Chairman of the Party, also stressed the need for the party to close its ranks after the congress and urged delegates to vote for a candidate, who had integrity and loyalty to the party and committed to party principles.

"You owe it a duty to the rank and file and the entire nation to vote according to your conscience and not based on favours by aspirants and I trust that you would give as the right candidate to lead the Party in 2008," he said.

Nana Ohene Ntow, General Secretary of the Party, announced that voting by proxy was not allowed, saying that the authority to vote at the congress was a privilege and not a right.

Representatives of various political parties in the country took turns to deliver solidarity messages to the NPP.

Mr. Kofi Adams, Deputy National Youth Organiser of the National Democratic Congress (NDC), invited a lot of hooting when he said that the NPP should vote for a Flagbearer that would lead them into opposition in 2008.

President John Agyekum Kufuor is asking for forgiveness from members of his New Patriotic Party, (NPP).

Addressing the NPP delegates' congress on December 22, 2007, President Kufuor apologised to the rank and file of the party saying that every mistake he might have committed during the period of his stewardship as president of Ghana, was not deliberate and without any malice.

The President apologised for any act of commission and omission during the period of his stewardship.

The over 2300 delegates are still voting at the Great Hall of the University of Ghana, Legon to elect a flag bearer, at the time of writing this story around 1816 GMT.