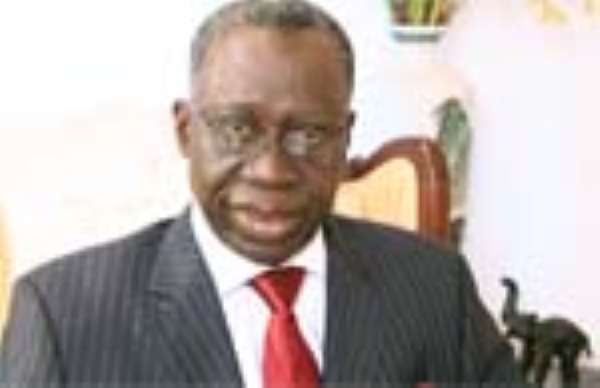 Interesting developments emanating from the ongoing ball-game towards the election of a flagbearer for the ruling New Patriotic Party (NPP), give strong indications that there could be a divine hand in the process.

Even though a number of the aspirants had openly declared their belief that it is God who enthrones kings, nothing makes it more manifest than the sequence of events at the ruling party's headquarters two weeks ago when all 17 aspirants met party leaders to ballot for positions to address delegates at the December 22 congress.

Political observers as well as insiders are beginning to conclude that it was not for nothing that Mr. Yaw Osafo-Maafo, former Finance and Economic Planning Minister picked the first spot at the end of the day.

For, long before that day, a lot of pastors and religious leaders had given prophesies to the effect that the Oda MP would be the next leader of the country if he is the first aspirant to address the party's delegates at the Great Hall of the University of Ghana.

The prophesy, according to deep-throat sources, and which was confirmed by Mrs. Difie Agyarko Kusi, communications director of Osafo-Maafo's campaign team, stated expressly that “whosoever picks the first slot to speak at the congress is the Lord's chosen one for the presidency”.

What was amazing at the 4th December aspirants' meeting was the way events unfolded.

The former Minister was reported to have been down with fatigue after returning from a strenuous northern campaign trip, and therefore asked one of his boys to represent him at the meeting.

The specific message he gave the 'boy', later identified as Kofi from Akim Oda, was to go for the first slot to declare everything a done deal. Interestingly, none of the 12 aspirants who picked before him took the first ballot, until his representative, the 13th to pick, went for the much expected 'number one'.

But that was not the beginning of the seemingly stupendous divine arrangement. At the launch of his campaign in Kumasi in early October, where he laid bare his vision for the country, Osafo-Maafo virtually offered himself for the sacrificial job of salvaging the nation's ailing economy when he stressed: “Here I am, send me”, which was a biblical injunction in Isaiah chapter 6 verse 8.

As he embarked on his final national tour, Osafo-Maafo's main message to the delegates was that they had been selected to anoint the already-chosen one, and advised them to pray for God's direction before casting their votes that day.

“Please take your role very seriously, and be prayerful that day. We should be careful in making the crucial decision,” he cautioned.

He then gave them his 'three Ps', which were voting to 'Promote, Protect and Preserve' the party, asking them to keep it in mind.
“We're not choosing a leader for the NPP, but for the entire nation,” he stressed.

Being with the party since its inception, he said he was the true unifier because he got on well with all the other aspirants, and contended that he could knock out the National Democratic Congress (NDC's) Prof John Evans Atta-Mills in the first round of the 2008 presidential elections.

Osafo-Maafo and Atta-Mills were classmates at Achimota School, reading Science and Arts respectively. And as providence would have it, the two took turns to become heads of the National Economic Committee.

While Mills left $235m foreign reserves for the nation, Osafo-Maafo handed over $1.8b in the national kitty when he was leaving office.
The Oda MP, who picked his forms on 25th September, 2007, was the sixth aspirant to file his nominations.

So large and traditional was the crowd that greeted him at the party headquarters that for close to 20 minutes he reciprocated the cheers by treating his admirers to some skillful 'adowa dances', as they chanted 'Oyeadeayie, Ghana refrewo', to wit: 'The problem-solver, Ghana is crying for you'.

The former Minister made another strong presentation of his presidential bid when he brought Kumasi, the nation's largest city, to a standstill four weeks later.

At the official launch in the Ashanti regional capital, nearly half a kilometer long of human traffic greeted and escorted him on a march through the principal streets amidst drumming and singing of 'asafo' songs from Adum, through Kejetia, Central Market to the Prempeh Assembly Hall at Fante New Town.

“We didn't give you the name 'Oyeadeeyie' for nothing. You deserve to lead this country,” an old woman, possibly in her seventies, shouted at the Post Office Square.

Later in an address, the presidential hopeful told his audience that he was not running merely for the sake of being president.
“I want to move the nation to the next level, and that can only be done by a man of vision,” he noted.

Since the party opened nominations on 22nd September 2007, a number of aspirants have maintained that it takes a divine hand to enthrone or dethrone a king.

Although pundits have made their predictions, only time will tell who will emerge winner of the NPP's presidential primaries, when the ruling party holds its congress at the Great Hall of the University of Ghana on December 22, 2007.