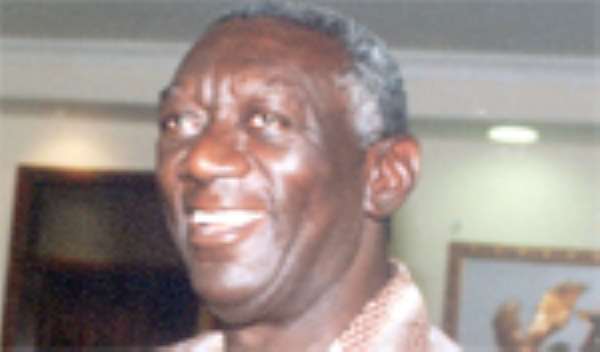 MR. KWESI Amoafo-Yeboah, an independent presidential candidate in the 2008 general elections, has stated that he will consult former president Jerry John Rawlings and President John Agyekum Kufuor for advice on sensitive national issues when he becomes president of the country.

He said he would ask for the opinions of the two high personalities who, hopefully, would be the two living former presidents of the nation when he assumes office as president in 2009.

Mr. Amoafo-Yeboah promised to invite Messrs. Rawlings and Kufuor to the Council of State immediately he becomes president to assist him with their rich experiences.

According to him, the two personalities joining the Council of State would be a recipe for proper development of the country, adding that it would also help save the nation from the political polarization that had engulfed it in recent times.

Mr. Amoafo-Yeboah, who was speaking in an exclusive interview with DAILY GUIDE in Kumasi, indicated that the position of a president was full of stress and insisted on the need for the nation to pamper its former presidents after they have left office.

He contended that both Mr. Rawlings and Mr. Kufuor have played vital roles in the country, hence the need to accord them due respect once they were out of office.

“There is absolutely no way that I will treat the two former presidents of this country with contempt. In fact, I will ensure that they get the necessary respect and material rewards that are due them after their sacrifices for the country,” he vowed.

The independent presidential candidate criticized the ruling New Patriotic Party (NPP) and the opposition National Democratic Congress (NDC) for blaming each other for the country's problems without making any efforts to solve them.

He said their attitude did not augur well for the country, adding that it was also debarring the country from growing at a faster rate since the NDC and NPP were always praying for the other to commit a blunder just to score cheap political points.

Mr. Amoafo-Yeboah said the current situation, where the opposition parties fold their arms and sit on the fence just to wait for and criticise the mistakes of the ruling party, is not in the interest of the country and called for its immediate stoppage.

He contended that the country at this moment needed a neutral, competent, humble, God fearing and patriotic person like him to be at the helm of affairs to assemble the best brains from across the political divide to get the nation firing on all cylinders.

“Ghana at this moment, does not need political bickering or in-fighting; we need to consolidate our human resources to fight poverty which is our major enemy,” he noted, adding that the government needed money to promote infrastructural development.

Mr. Amoafo-Yeboah admonished the electorate to do away with partisan politics and elect an independent candidate who has antidotes to the myriad problems confronting the country, stressing that he was the right candidate to lead the country to the 'Promised Land'.

Touching on his chances in the up-coming general elections, Mr. Amoafo-Yeboah said he had the best chance to snatch political power in 2008, promising servant-leadership skills when he becomes the president.

“Ghanaians are discerning people, so after trying the NDC and the NPP, they would surely give me their mandate to lead the country to a brighter future,” he remarked confidently.

He vowed to revamp the educational, health and agricultural sector when he is elected president, adding that he would ensure private sector participation in the educational sector to enable every school-going child in the country get access to proper education.

The San Francisco State University Graduate also pledged to construct hospitals, roads, schools and other social amenities in the rural farming areas to encourage the youth to stay at home and patronize farming.

He condemned the current size of government as big and promised to reduce it when he takes over as First Gentleman of Ghana.

He as well promised to revamp the security agencies to enable them deal with recalcitrants who might be tempted to make life unbearable for law abiding citizens, adding that the current security situation of the country was not the best.From Fred J A Ibrahim Jnr., Kumasi