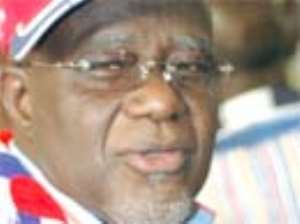 The first signs of attrition amongst some aspirants in the flagbearership race of the ruling New Patriotic Party (NPP) is beginning to show.

Exactly nine days to the Special Delegates' Congress at the University of Ghana, where the party would pick its candidate for the 2008 presidential election, some of the aspirants are not only embittered, but have actually voiced what they see as 'rough tactics' by others.

Yesterday, one of them, Hon. Hackman Owusu-Agyeman told the media he was not pleased with what he described as the 'Animal Farm' treatment, where the party was considering some aspirants as 'more equal than others'.

The New Juabeng North MP, who was in Wa, the Upper West Regional capital, said his campaign was disrupted by his competitor, Alan John Kyerematen, who he said did not follow the rules of the game.

Sounding very bitter, Hackman said Kyerematen broke protocol by flying into the region without the consent of the party's regional executives, as a result of which about 100 delegates, who were expected to meet him, literally did a runner from him to meet his competitor.

“He absolutely disrupted my programme. I will not accept this 'Animal Farm' tactics of some aspirants are more equal than others,” he fumed on several radio stations yesterday.

The aggrieved aspirant said he had since reported the matter to the party's regional and national executives. He said Alan's use of an Air Force plane did not make the playing field level.

“Nobody is above the law. If the Air Force plane is now a commercial plane, then it must be made available to all. I was once a member of the Armed Forces Council, and I know it is dangerous for anyone to just go for an Air Force plane,” he indicated.

Mr. Kyerematen went to Wa on a chartered Ghana Air Force Fokker 27 aircraft G520, but Hackman said his opponent's unannounced visit to the region was “a flagrant violation of the rules”.

The former Interior Minister was kept waiting for several hours because the delegates, who had earlier gathered to listen to him, vamoosed when Alan's arrival was announced.

Hon. Hackman made a follow-up to the airport and even took a picture of the airplane.

He told Joy 99.7 FM that “what is irksome, what is upsetting is the fact that there are rules of engagement for us the aspirants that you enter a region through the secretariat and they put a programme together.

But nobody in the region, neither the Regional Chairman, the Regional Secretary, Organizer, nobody knew about his visit and that of course was a flagrant breach of the code of conduct and the code of ethics and I took exception to this”.

He told the Accra radio station that he only had the opportunity to speak to the delegates after Kyerematen had distributed something to them.

He would however not comment on what exactly his competitor was distributing but said his main concern was the flagrant abuse of the party's agreed campaign procedures.

Even though Colonel Emmanuel W.K. Nibo, director of GAF Public Relations, explained that the plane had been rented a couple of times for civilian programmes, the aspirant did not sound convinced.

“If the rules of the game is to rent out an Air Force plane- a state property- to civilians, then tomorrow we will be renting out our armoured vehicles,” he said.

He indicated that he had reported the matter to the party's National Chairman, Peter Mac-Manu, saying he would not take kindly to it.

Alan's use of the plane had set a lot of tongues wagging in the media and political circles, with some imputing that government was dabbling in the already tense political ball game of the ruling NPP.

However, a quick check at the Defence Ministry revealed that the plane in question had been rented out a number of times for various civilian programmes.

Members of the Ghana Football Association, National Sports Council and the Musicians Union of Ghana have, according to sources, chartered the plane for various programmes.

Speaking to Peace 104.3 FM, Col. Nibo said the plane was no longer being used by the President and that it could be rented out upon a written application to the Ghana Air Force.

Asked what the charge was, he said it depended upon the distance, number of hours and other factors. He however hinted that there was a fixed charge of ¢19.4 million (GH¢194.00) per hour plus other considerations.

The colonel could not tell precisely for how many hours the plane was chartered, but revealed it was an Accra-Wa-Tamale-Accra route.

He also said a company called Munich chartered the plane for the campaign activities of the former Trade, Industry, PSD & PSI Minister.

A member of the Alan team later explained that there was no plot to derail Hackman's campaign or hijack his supporters. According to him, Mr. Kyerematen was to meet the delegates at 8.30am while Hackman slated his meeting with them for 10.00am that day.

Reacting, the NPP National Chairman, Mac-Manu, described the incident as unfortunate and recalled that the party had advised aspirants to conduct their campaigns in a harmonious manner to avert clashes.

He said he had called for an investigation to be conducted into the matter to avert a recurrence.

A few hours before the incident, Hackman had told the Wa media that under no circumstance would the NPP split as happened in 1979, saying the ultimate objective of their campaigns was to retain power in 2008.

He later told the delegates that apart from the former UN Secretary-General, Mr. Kofi Annan, no other Ghanaian had a better international exposure than him, saying he was best placed to beat NDC's Prof. Atta-Mills.

For his part, Mr. Kyerematen described himself as the best choice when it comes to attracting floating voters to the party in the general elections.

It would be recalled that barely four weeks ago, Kyerematen narrowly escaped death when his campaign convoy was involved in a ghastly motor accident on their way from Techiman in the Brong Ahafo Region.

Two people died in the accident, one of whom was buried last weekend and the other will be interred in Kumasi this weekend.