I Believe In Ghana - Declares Hackman 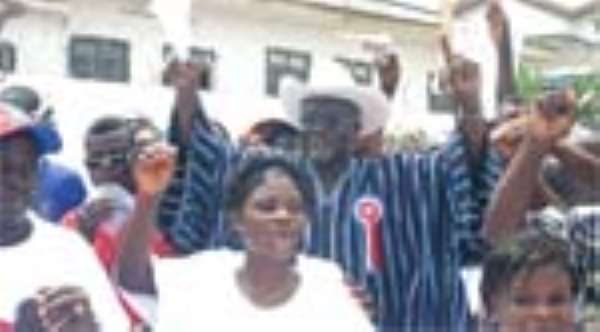 HON. HACKMAN Owusu Agyeman, MP for New Juaben North Constituency and New Patriotic Party (NPP) presidential aspirant, has noted that Ghanaians have what it takes to transform the country into one of the most developed and powerful nations on earth.

According to him, all that the people need is a visionary, caring and courageous leader to take them along the journey to the 'Promised Land', adding that he hoped to bring the needed servant-leadership to bear on the body politic when given the nod by the party as its flagbearer in the 2008 elections.

He therefore appealed to the party's delegates to give the vote to the best man whose track record, commitment and sacrifice both to the party and nation, is second to none.

This was part of the powerful message he gave the party's foot-soldiers on his second national campaign tour in readiness for the December 22nd, 2007 Special Delegates Congress.

He said it was that absolute faith in the Ghanaian that guided him to insist, when he was the Minister for Water Resources, Works and Housing, that the National Affordable Housing Programme projects be given to local contractors, and noted that he was not disappointed at the end of the day.

“Nobody will develop this country for us, unless we do it ourselves. Above all, I believe in the potential of the Ghanaian, and for me, that faith grows by the day. That was why I took that chance, and it paid off because only a few of them were not able to deliver,” he said.

The aspirant said the people of Ghana had all along proven to the world the kind of stuff they are made of, and promised that when given the nod, he would give local entrepreneurs the needed support and encouragement to demonstrate their developmental acumen.

He stressed that it was not for nothing that he launched his campaign at Oyoko, a small village in his constituency, and hinted that he started life as an apprentice goldsmith and porter at the Koforidua railway station, before he eventually had the opportunity to go to school.

He said his humble background and rapid rise to becoming a graduate at the age of 23, had actually prepared him for the task ahead of him, even to the United Nations and in the business world.

This exposure and his commitment to national causes, he says, make him second to none in the on-going aspirants' race.

Describing the race as something further than a 100-metre dash, he cautioned delegates against giving their nod to the highest bidder and asked them to make a good assessment of the aspirants before making a decision.

“That was what I learnt - that rewarding loyalty and commitment is part of the guiding principle for any party political formation.

Competence, one can always buy, but loyalty and commitment one cannot buy, and this was why I said at Oyoko that there shall never come a time when a Pharaoh came to the throne that did not know Joseph,” he told delegates.

Mr. Owusu-Agyeman reiterated that the next leader to take over the baton from President John Agyekum Kufuor needs to be equipped with what he called 'capacity, character, courage and care'.

“In other words, when the people hurt, you hurt, and when they rejoice, you rejoice because you cannot lead a people if you are not with them,” he said.

Counting himself as a true party man, the aspirant said he was not only the founding treasurer, but helped in signing the document that brought the party into being.

He catalogued how the decision on the elephant as the symbol was taken, and how party colours, constitution, and manifesto were all worked out in his East Legon residence and under his chairmanship, saying this is a matter of record and not subject to any debate.

He said the issue of who should lead the party has more to do with track-record than age and assured that President Hackman Owusu-Agyeman would make it a point to pass by the party office every two weeks to afford members the opportunity to interact with him regularly.

“I was not born with a silver spoon in my mouth, so I know what it is like when you do not know where the next meal is going to come from.

I am one of you. I understand you, and I promise to do what I am saying that I will do. I have kept faith with you over the years, and I will not abandon the party,” he concluded.

Ghana not likely to get next batch of COVID vaccines until m...
23 minutes ago