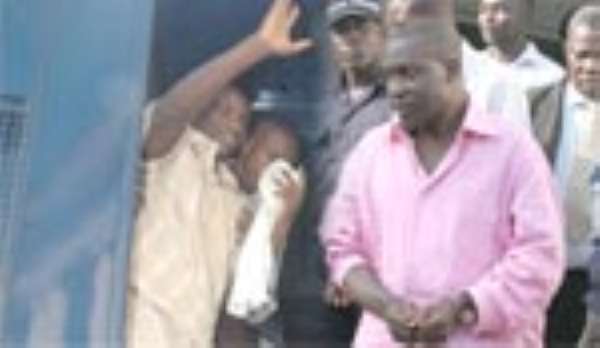 AN ACCRA Fast Track High Court, presided over by Justice Jones Dotse, yesterday sentenced Kwabena Amaning alias Tagor and his accomplice, Alhaji Issah Abass, to 15 years imprisonment each after they were found guilty of dealing in narcotic drugs.

The accused persons were given 15 years on each count and the sentences are to run concurrently.

The trial judge, who suddenly announced that judgment was ready to be read, however

discharged them on two counts each of buying and supplying narcotic drugs, on the grounds that the evidence available was not enough.

In a judgment, which lasted for over three hours, Justice Dotse found most of the 11 witnesses called by the prosecution, as well as Dr. Kofi Agyekum and Prof. J.P. York, the voice experts who analysed the voices of the accused persons on Boakye's tape, as credible.

According to the judge, Prof York was an expert of international standing who had been analysing voices of people in the International Court of Justice in The Hague and at war crime tribunals worldwide.

The judge however expressed dissatisfaction with the shoddy work done by the first investigator in the case, Justice Oppong, describing him as an incompetent detective whose conduct in the witness box exposed him.

Justice Dotse was of the view that for his own selfish reasons, Mr. Oppong searched the house of Tagor who lives at East Legon, four clear days after he had been assigned that task and advised the Police Service to check on the records of such detectives before giving them such assignments of national importance.

He was however full of praise for Detective Inspector Charles Adaba, who completed the investigations and got the meanings of the jargons used on the tape by the accused persons, who were described by the Acting Director for Public Prosecutions, Miss Gertrude Aikins, as “drug barons who purchased and credited drugs in the underworld”.

The trial judge said Inspector Adaba deserved commendation for his painstaking investigations which proved useful to the trial.

Justice Dotse said there was no doubt that a meeting was held in the house of the interdicted Director of Operations of the Ghana Police Service, and that a discussion on the missing 76 cocaine parcels was the subject matter between him, the accused persons and three others.

He said words used on the tape by the accused persons and the interdicted Director included “goods” and “key” which were explained by Inspector Adaba to mean cocaine and kilogrammes in the underworld.

The defence by the drug barons that they were baiting Kofi Boakye to talk after Issah was assigned by Ben Ndego of the Narcotics Control Board to record the meeting, was rejected by the judge.

Furthermore, Justice Dotse said their defence of baiting the ACP had failed woefully due to their loose talking on the tape, noting that they would not have been that open if they were indeed baiting Mr. Boakye.

On Tagor, the judge was of the opinion that there were controversies surrounding his real name as he had several aliases in the past and a cloud of uncertainty hanging over the number of houses he has in Accra, adding however, that the prosecution could have done a better job.

According to Justice Dotse, the demeanour of Tagor in the witness box portrayed him as someone who had very little regard for the truth.

He as well observed that Issah had grown so powerful even among police officers that he had the guts to seize a vehicle belonging to them without a court order, for owing his company, Gazimpex, and blamed the Police Service for that incident.

The judge said Issah, who claimed to have been giving the police tip-offs leading to the arrests of some wanted persons, tried to malign Inspector Adaba because of his vigilance by alleging that the investigator and his colleagues saw Sheriff, a suspect in the case, but failed to arrest him.

He noted that after the allegations, Ms Aikins brought a police diary of action to prove that Adaba was not among those who went to Ada to effect the arrest of Sheriff.

Justice Dotse expressed worry about the seemingly stony silence of the Attorney General in prosecuting ACP Boakye even though everyone was equal before the law.

Reading certain printed portions of the tape recording, the judge reiterated that the ACP should have been charged but said since prosecution had no time limit and the AG had the power to prosecute, “only time will tell”.

He said he had taken into account the mitigation plea of their counsel but had also taken into consideration the menace of narcotic drugs to society.

Prior to the sentencing of the accused persons, their counsels, Mr. Ellis Owusu Fordjour and Mr. Mohammed Atta, pleaded for mitigation for their clients as they were first offenders.