CHIEFS RUN AWAY •From Witch Tree 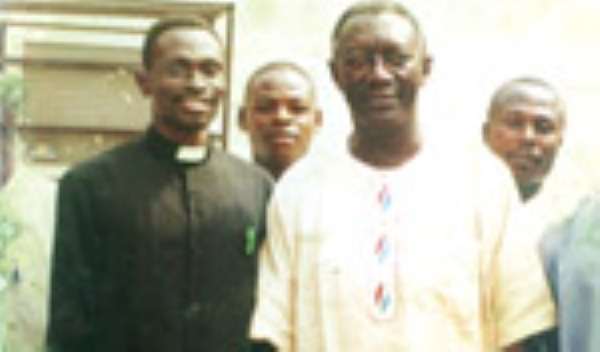 Elders of the Ofankor Traditional Council who vehemently pressed on for government to cough out ¢100 million before they will allow the felling of the notorious witch tree, have gone underground.

Minutes after the job was done free-of-charge the elders could not be traced, as the myth surrounding the abode of their 'Olila' god had been broken by a Man of God.

All attempts by DAILY GUIDE since Monday to contact the chiefs or their representatives through their mobile phones had proved futile. The telephone rung “pong, pong, pong” and finally said, “The number you have dialed cannot be reached at the moment.

The mobile equipment is either switched off or out of coverage area.”

It would be recalled that the chiefs and linguists were vocal during months of deliberations with the Ghana Highway Authority (GHA) and boisterous when a so-called witch-hunter, Professor Azeez attempted to cut down the tree.

He was dragged to the palace of the chief of Ofankor, where he was slapped with fines and a warning never to venture into the tree shrine again.

The elders, it would also be recalled, took an entrenched position on their demands and compelled government to cough up well over ¢100 million in cash and other items.

The elders collected the money for ritualistic purposes to exorcise the tree and make it acquiescent for the cutting, but had since Monday not made themselves available to the media. While some of them would not pick up any calls, others simply switched off the phones.

The paper was making frantic efforts to get them to speak their mind on the way Apostle Opoku Williams, the 56-year-old founder and head pastor of the Israel Pentecostal Church of Abehenase, near Amasaman, destroyed the abode of their gods without any prior information to them and its repercussion for the nation.

The brouhaha is over the felling of a tree standing in the way of the contractor handling the Achimota-Ofankor highway, but elders and youth in the area kicked against the felling of the tree, contending that it was of great spiritual significance to them.

Calling for an appeasement of their gods, the traditional council demanded cash and other items, but nearly three weeks after collecting these, the tree was intact until the apostle did the job, which according to him, was upon the instructions of God.

According to a letter dated 29th October, 2007 and signed by Nii Ashitey Tetteh, Chief Linguist of the Asere Traditional Council of Chiefs and Elders, the 15 items, which would be needed for the performance of 'Olila' rituals, must be ready not later than November 5, 2007.

A Nigeriene national who was assisting the contractor in felling the tree was attacked by the youth of the town and beaten, but when the matter of assault was reported at the Tesano Police Station, the Divisional Commander, Mr. Duku asked GHA to cooperate with the youth and traditional authority in performing whatever rites they must have prescribed.

The GHA therefore had no option but to acquiesce to the demands of the traditionalists, and after a protracted negotiation, paid ¢70m and the assorted items to them.

In a related development, Apostle Opoku Williams, who broke the myth surrounding what was until last Monday known as the Ofankor Witch Tree, has revealed that in the past 10 years he interceded and prayed for several prominent Ghanaians as the spirit of God directed him to.

Hours after stunning the nation with the felling of the stubborn tree, the Man of God, in an exclusive interview revealed that close to the eve of the 2000 general elections, he voluntarily went into intercessory prayers and sought for divine favour for the then candidate John Agyekum Kufuor.

He said he believed his prayers contributed to the landslide victory of the then opposition New Patriotic Party (NPP), and hinted that he as well prayed for the smooth administration of key police personnel including Dr. K.K. Manfo, former deputy Inspector-General of Police.

Born in September 1951, Apostle Williams, now 56, was before his calling in 1997 a cocoa farmer at Enchi Dadieso in the Western Region.

His first miracle was recorded at Bordie-Asankragwa, where he drove out a legion of evil spirits that had made a house inhabitable.

He moved the church to its present location at Amasaman, and specializes in problems related to impotence, infertility in marriage as well as casting out demons.

He said a stranger brought to him the silver key with which he unlocked the spirits that lived on the witch tree.

According to him, he was at first skeptical when he received the key, and chastised the courier. He however decided to nail it to the tree with a red cloth as instructed while he prayed over it.

This was before Professor's Azeez abortive attempt to cut down the tree. He said he waited until the d-day when he contracted a chainsaw operator and together at dawn of Monday November 26, they felled it amidst a lot of spiritual challenges.

We'll resist any attempt to impose Kennedy Kankam on us as K...
32 minutes ago