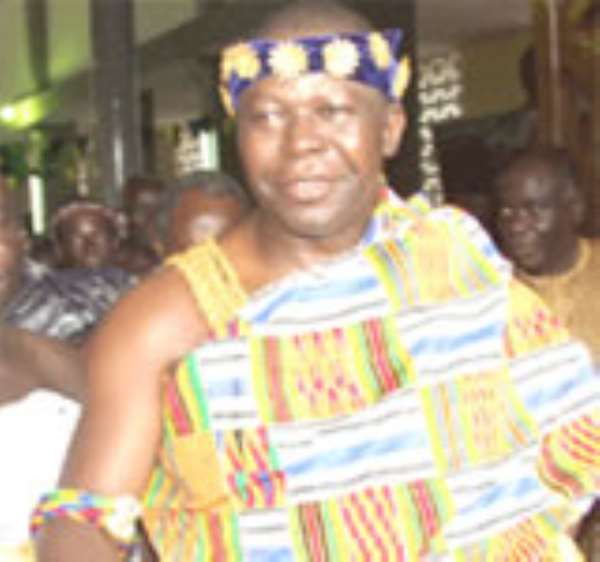 The Asantehene, Otumfuo Osei Tutu II has blamed Africa's slow pace of development and poor economic conditions on the neglect and abandonment of the continent's culture and traditional heritage in its governance and development process.

He pointed out that there was a cultural dimension that was acting as psychological block on Africa's development, and attributed the present condition of the continent to lack of confidence in the culture and traditions bequeathed to the people by the forefathers of the continent.

Otumfuo Osei Tutu has therefore suggested the infusion of traditional institutional structures which had been developed over the centuries into the new democratic structures on the continent to make them more meaningful to the people.

He was speaking at the 5th convocation of the Igbinedion University, Okada in the Edo State of Nigeria on Saturday, where he was conferred with an honorary Doctor of Law degree by the University.

The University also conferred an honorary Doctor of Letters degree on Honourable P.J. Patterson, former Prime Minister of Jamaica and a Doctor of Law degree on Alayeluwa Sijuwade Olubuse II, Ooni of Ife Kingdom in Oshun State of Nigeria.

The conferment of the degree on the Asantehene was in recognition of his exemplary leadership and promotion of education.

A citation accompanying the degree said Otumfuo had won great admiration for his unique blend of traditional leadership with modernity and the establishment of an educational fund to support needy children in Ghana.

The Asantehene said in the pursuit of western democracy, Africa should not throw away its culture and traditions and surrender to everything foreign.

He compared Africa's situation to that of Asia, and said the culture and way of life of Africans had been the foundation upon which the so-called Asian Tigers had built their work ethic and creative energy, adding that, that had sustained their self-confidence that whatever anyone had done, they could also do and probably better.

“I suggest to you therefore that understanding our past and our culture which identifies us as a people is important for our self-confidence and that self-confidence is an indispensable pre-requisite for our survival in the challenging new era,” he stated.

The Asantehene noted that over the centuries, majority of people in Africa have had their direct contact in terms of governance with their traditional rulers and institutions.

This, according to him, had helped them in resolving conflicts, maintaining law and order and mobilizing them to care for their environment.

He said the condition of trust and loyalty built over the centuries could not be replaced, adding that they provided a potent pathway for the accelerated development than most of the institutions imported from foreign countries.

Otumfuo Osei Tutu went on that Ghana had found a useful marriage between tradition and modernity which was serving the people well, stressing that Ghanaian traditional rulers were playing crucial roles as partners in the democratic process.

The traditional institutions remained primed to explain to and mobilise the people behind the goals and objectives of their leaders without the rancour associated with other institutions, the Asante Overlord observed.

He said the quest for Africa's development would gain greater impetus from the commitment of the peoples of Africa beyond the political leadership and the elite.

According to him, there was the need to inspire the people in a new belief in themselves, saying they must truthfully share in the hope of a new destiny on the horizon in Africa.

He indicated that that inspiration could come from a deeper understanding of the story and appreciation of the various cultures and way of life of the people.He said the honorary doctorate degree conferred on him would not only serve as bond between him as the Chancellor of the KNUST and management of Igbinedion University, but also between the peoples of Asante and Benin Kingdom and Ghana and Nigeria.

Otumfuo Osei Tutu commended the founder of the University for the initiative and his quest to provide quality education for the people to empower them to take up the challenging task of liberating Africa from poverty, disease and other challenges militating against its development.

Honourable P.J. Patterson, former Prime Minister of Jamaica, on his part, said it was time for Africa not only to emancipate itself from mental slavery but also to seek knowledge that would free its people from the shackles of poverty and disease.

He also commended the founder of the University for his foresight and tenacity of purpose in establishing the institution, and urged the students to take advantage and learn hard to acquire knowledge.

The Reverend Professor Eghosa E. Osaghae, Vice Chancellor of the University, said the University had a Centre for Entrepreneurial Studies, which offered students a window to life as successful creators of wealth.
GNA