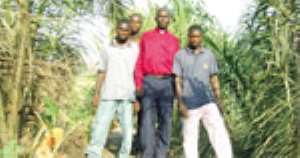 The notorious Ofankor 'Rock of Gibraltar', which has defied modern scientific theorems and refused to give way to road contractors, has finally kissed the dust.

Referred to in media circles as 'Witch Tree', the 'onyina', which was said to be the house of the 'Olila' god and had caused a lot of sensation all over the country with its resilience to bulldozers and chain-saw machines, fell yesterday, thanks to the spiritual prowess of a 'Man of God'.

The man behind the miraculous feat was Apostle Opoku Williams, founder of the Israel Pentecostal Church at Abehenase near Amasaman in the Greater Accra Region, who defied all odds and embarked on an early morning operation that lasted for about two hours and finally brought down the magic tree.

Interestingly, the felling was done free of charge, three weeks after elders of the Ofankor Traditional Council had collected ¢90m, cows, goats, sheep, gallons of akpeteshie and other assorted items from the Ghana Highway Authority (GHA) for the same purpose.

Speaking exclusively to DAILY GUIDE just two hours after the historic feat, the Apostle said the tree was actually a concrete pillar, which he had to spiritually reverse into a normal tree before it became possible to fell.

“To the naked eye it is a tree, but in actual fact it is a concrete pillar. That was why several efforts to fell it failed, and the blades of several chain-saws got damaged,” he said.

The Apostle revealed that even after it was reversed into a normal tree, the 'onyina' released flames of fire whenever the operator, Kwadjo Naben Mumuni and his assistant, Alex Fosu, neared it with their Dolmar machine.

He said the tree, which was the citadel of several witches from around the world, had a grand theatre, possibly more magnificent than the National Theatre in Accra, and a large hospital, better equipped than the Komfo Anokye Teaching Hospital at its summit.
According to him, he was given the key to the tree two months ago by an old man, whose name he could not recollect.

Apostle Williams said the shiny silver key, which had an image of a human skull, was handed to him for the sole purpose of felling the tree, adding that two weeks after receiving the key, he went into days of prayer and spiritual fortification for the final onslaught.

For instance, he disclosed, he had affixed the key and a red calico to the tree some one and a half months ago to signal the occupants to vacate the place in their own interest.

He said he also had a divine directive to go ahead and fell the tree, but before he could finish with the preparations, there was a hullabaloo over it in respect of a Nigeriene witch hunter who was attacked by some Ofankor youth when he attempted to cut it down.

The 'Man of God' indicated that the development made him relax a little until last Friday when he had another divine directive to proceed to the site and bring the tree down.

He therefore sought the assistance of Mumuni and Fosu to help with the physical aspect of the job, and after nearly an hour, they succeeded in felling all three trees that were hampering work at the site.

He was grateful to the Pokuase Police for giving him protection and directing traffic in the area during the dawn operation.

Apostle Williams emphasized that he did not fell the tree for any publicity, but that he was doing it in obedience to the directives of God.

Mumuni, who said he was scared even after felling the tree, disclosed that he nearly abandoned the operation, especially midway when the blade of the chainsaw suddenly went blunt.

He said at that point, he started feeling weak so he quickly asked Fosu to get him 'something' from his bag.

“Just as the tree was about to fall, a great flame erupted and when it fell, the ground shook,” he said, adding that Apostle Williams was to be praised for a job well done.

It would be recalled that the chiefs and traditional authorities of Ofankor demanded a whopping ¢100 million and assorted items, also running into several millions of cedis, from the Ghana Highway Authority before they would permit the felling of the tree for on-going road construction.

According to a letter dated 29th October, 2007 and signed by Nii Ashitey Tetteh, Chief Linguist of the Asere Traditional Council of Chiefs and Elders, the 15 items, which would be needed for the performance of 'Olila Rituals', must be ready not later than November 5, 2007.

The letter, addressed to Mr. Acquah of the GHA Head Office and copied to the chief of Ofankor, Nii Abban Kortei II and Nii Kpakpa Brofonyo II, Ga Akwashong Mantse, also demanded three cows, three sheep, six fowls, 12 crates of egg, six pieces of calico, 12 tubers of yam, one gallon of palm oil, six tins of maize, one carton of gin, one carton of schnapps, one carton of whisky, two tins of akpeteshie, and kpele and asafo drums.

The tree had to be cut down to pave way for a Chinese company to go ahead with construction work on the Achimota-Ofankor section of the Accra-Nsawam highway, but the youth went up-in-arms when the contractors started felling it a few weeks ago, claiming it was of great spiritual significance to them.

The irate youth claimed that the tree, far from being a base for witches, was a shrine.

They therefore confronted a Nigeriene involved in the felling process, and slapped him several times before eventually dragging him to the chief's palace, accusing him of committing sacrilege.

They did not understand why Amidu Sabo Azzez, a foreigner, should trespass that far into their 'holy shrine', and noted that the gods of the area would have to be pacified before the construction would proceed.

Incidentally, when the assault was reported to the Tesano Police Station, the Divisional Commander, Mr. Duku, asked the Ghana Highway Authority official, Mr. Acquah, to cooperate with the youth and traditional authorities in performing whatever rites they prescribed.

The GHA therefore had no option but to heed to the demands of the traditionalists, and after a protracted negotiation, paid ¢90m and the assorted items to them.

The tug-of-war had stalled construction work on the Ofankor/Achimota road for several weeks.