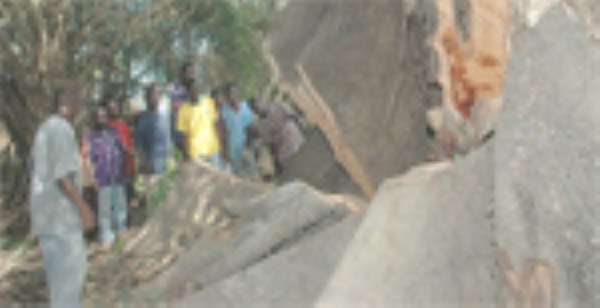 LATEST INFORMATION coming from Ofankor, has revealed that ¢90 million has been paid by the Ghana Highway Authority (GHA) to the Chief and elders of Ofankor for pacification rituals on the giant onyina tree gods, to enable the tree to be felled.

This came to light during an interview with the Ofankor Chief Linguist, Nii Ashietey Tetteh on Peace FM, an Accra based private radio station yesterday.

According to him, they initially collected ¢70 million from the GHA to buy the items for the rituals but realized that it was inadequate for all the needed items, and consequently went back for the extra ¢20 million.

He indicated that the current amount in their possession would be sufficient to procure the materials for the exorcism.

The first ritual was performed under the tree last Friday night and another is scheduled for Saturday after which the tree would be cut down.

The Ofankor witch-tree has been an Achilles heel to WUJU, the Chinese Construction Company undertaking the Achimota-Ofankor road construction project as all efforts to cut it down ended in failure.

Five chain-saw machines ended their lifespan there and a Chinese bulldozer retreated for safety.

From nowhere bounced in a hardened witch hunter, who introduced himself as Professor Sabo Azeez and claimed to be domiciled in Suhum.

He declared that he had heard of the power of the witch tree and had come to break the jinx and true to his word, the man would have felled the tree had he not been stopped by irate Ofankor youth, who accused him of trespassing on their holy grounds.

The youth slapped and heckled the witch hunter and his boy and dragged them to the chief's palace.

Azeez was found guilty and fined one cow, six sheep, one bottle of akpeteshie and six bottles of schnapps in addition to ¢2 million.

The matter later landed at the Tesano Police Station where the District Commander, Mr. Duku, advised GHA, the project supervisors, to cooperate with the Ofankor elders for amicable settlement and the eventual cutting of the tree.

After Azeez's brouhaha, the Ofankor chief and elders came out with a long list of requests which they claimed, were the items the gods were demanding for the cutting of the tree after they had consulted an oracle.

The items were three cows, three sheep, six fowls, 12 tubers of yam, a gallon of palm oil, six tins of maize, a carton of schnapps, a carton of whisky, two drums of akpeteshie, 'kpele' and asafo drums, in addition to ¢100 million to perform what they called olila rituals before allowing the felling of the tree.

This led to a closed-door tripartite meeting between the chiefs, GHA and government officials to find an acceptable solution to the stand-off for the continuation of the road project.

DAILY GUIDE later learnt that the Ofankor chief and elders had accepted ¢70 million for the purchase of the items for the olilah rituals after series of negotiations.

Three rituals are expected to be performed before the tree is cut down.