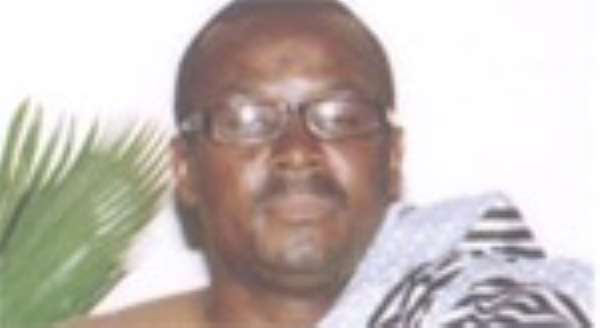 MR SAMWILLIAM Ayi Quaye, Policy Advisor and Consultant at the Office of the President, is billed to appear in the dock to answer criminal charges preferred against him by the Republic of Ghana.

This follows his gross disregard to summons from the Rent Control Department and the Dansoman Police, both in Accra, after he had personally ordered the premature ejection of a tenant from his family house and removed the roofing of the house for which all belongings of the tenant got damaged.

Quaye had snubbed the Rent Control's directives and supervised the ripping off of the roof of a two-bedroom apartment at House No. A. 286/10, Dansoman, leading to the damage of valuable properties.

The consultant and his mother, Madam Joana Quaye, had jointly been charged with Inducing Tenant to Quit and Causing Damage, and would appear before the City Engineers Magistrate Court in James Town on December 13, 2007.

Confirming the case, the prosecution noted that the criminal charges were preferred because of the failure of Quaye to cooperate with the Rent Control and the Dansoman Police, a development which led to the issuance of a bench warrant for his arrest.

According to the facts of the matter, in May this year, Quaye's family rented out the apartment to one George Nii Ayi Hammond, Systems Administrator at the Ablekuma Mutual Health Insurance and Daniel Ofori Appiah for three years at a total cost of ¢19.8 million.

But barely six months after occupying the premises, the tenants were asked to quit the house by the presidential advisor and his mother, under the pretext of renovating it.

Subsequently, Quaye caused a notice of vacation to be written through his solicitors on July 19th, 2007, giving the occupants two weeks to pack out or face any necessary action.

Part of the letter said: “You are therefore being notified and notice is hereby given to you to vacate the premises 14 days from the date of this letter, else our clients will take the necessary lawful steps to eject you”.

Interestingly, instead of the lawful steps, the landlords resorted to disconnecting electricity and threatening to remove the roofing of the house.

Apart from the letter, DAILY GUIDE has sighted a hand-written note at the back of Quaye's complimentary card, directing the tenants to quite without delay.

These threats prompted the tenants to petition the Rent Control Department since the landlords were not in a position to refund their money to them.

“We plead with the rent office to intervene on our behalf to be left in peace until the expiry or alternatively, for respondents to refund our full rent advances and sufficient time to find another place.

“They have disconnected electricity whilst we do not owe and plead for the facility to be reconnected without delay.

“As long as we do not owe, we plead with the rent office to restrain them from tampering with any facility,” part of the petition noted.

Responding, the senior rent officer, Accra, summoned the landlords on 7th September, saying, “You are hereby commanded in the name of the Republic to appear in person before me at 8.30am on Monday, the 17th day of September, 2007 at Rent Control Office, Accra and on every adjournment until this case is disposed of”.

DAILY GUIDE can say that the directive was not complied with, prompting the police to issue an arrest warrant and subsequently get them prosecuted at court.

The house at the centre of the brouhaha belonged to the late Prince Robert Ayikwei Quaye. Hearing is slated to begin on 13th December 2007.