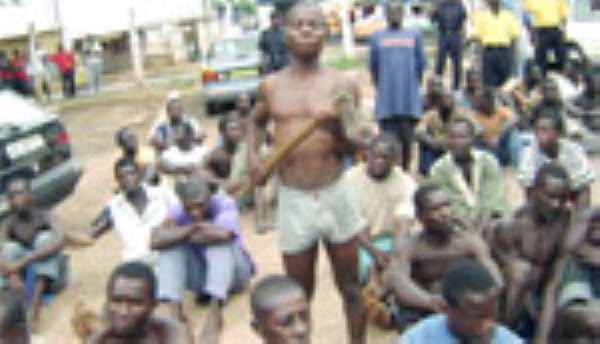 PRINCESS TOWN, a fishing community in the Ahanta West District in the Western Region, is now a ghost town, as residents have fled the area following a violent clash between two factions in a chieftaincy dispute.

The clash had claimed two lives.
Members of the Western Regional Security Council (REGSEC), led by the Regional Minister, Anthony Evans Amoah, who visited the area to assess the situation, had it tough in their bid to get inhabitants to talk to.

The only noise that could be heard in the town was the barking of dogs which were even hiding in the bushes, maybe because of fear of being killed.

At Asuboye near Princess Town, a lot of women and children were seen carrying their belongings and moving towards Agona Nkwanta, the district capital, to seek refuge.

Briefing members of REGSEC, Lt. Humphrey Tetteh, the commander of the security personnel sent to the area, said 47 people, all males, suspected to be involved in the clash, had been arrested and handed over to the police after an exercise on Wednesday.

He said the suspects would be screened and those found culpable would be prosecuted.

He disclosed that there were 75 security personnel, made of the police and military, stationed at the area.

REGSEC later moved to Aketekyi, where over 20 houses had been burnt and several others demolished by the aggrieved fighters.
At the time of the visit, all the men in the village had vanished into thin air, leaving behind children and a few women.

Addressing the women, the Western Regional Minister made it clear that what had happened was a sad situation and that government was doing everything possible to protect them, hence the presence of the security personnel.

He entreated the women to advise their husbands and relatives hiding in the bush to come back home, but ensure that they would not take the law into their own hands.

“We don't use violence in solving chieftaincy matters, but dialogue. You should let the DCE know such cases so that he can forward them to the Regional House of Chiefs for amicable settlement,” Hon Amoah advised.

He assured the people that if they would allow peace to prevail in the area, the security personnel would be withdrawn very soon.

Kwesi Biney, Ahanta West District Chief Executive, reiterated that the security personnel were there to ensure peace, maintaining that the personnel were not backing any of the factions in the dispute.

He regretted that such an unfortunate incident had been allowed to happened, saying it had affected everybody as businesses had been halted and basic schools in Princess Town and Aketekyi had also been closed.

It would be recalled that supporters of Nana Kundumoa IV and Nana Kundumoa V, both chiefs of Princess Town, clashed on Wednesday, 14th November 2007, over a protracted chieftaincy dispute.

The clash led to the death of Nana Tobiti Ackah, 47, appointed by Nana Kundumoa IV as chief of Aketekyi and John Yankey, a 26-year-old farmer from Aketekyi.

The body of Nana Ackah had been deposited at the Dixcove Hospital, whereas that of Yankey is at Effia Nkwanta Hospital morgue, awaiting autopsy.

According to the Kwesimintsim District Commander of Police, ASP Magnus Sam, Nana Kundumoa V had reported himself to the police and is assisting in investigations, but Nana Kundumoa IV had absconded.